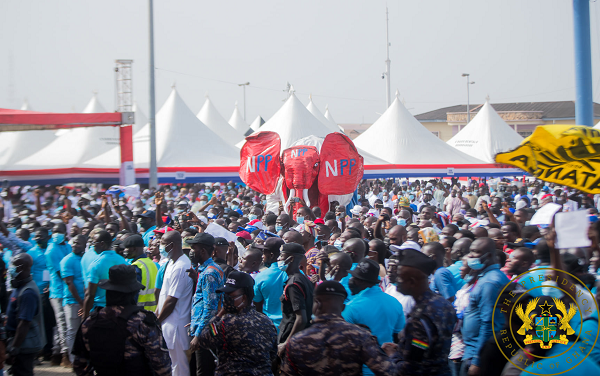 The first major gathering of the New Patriotic Party (NPP) after the 2020 elections took place in Kumasi over the weekend.

In all, over 6,000 delegates thronged the Heroes Park at the Baba Yara Sports Stadium to deliberate on the party’s fortunes and how it would annex power in the 2024 elections.

Undoubtedly, the organisation of such mammoth gatherings does not come easy except by way of a long-thinking through plan, hard work and the provision of logistics.

That the managers of the party had put together such an elaborate event is a plus to them.

We at the Daily Graphic, therefore, congratulate the NPP on the successful organisation of such a conference, which ended with a renewal and a pledge to deepen Ghana’s democratic governance.

Among other things, the party deliberated on a number of issues that it believed would enable it to break the eight-year cycle. It also considered proposal for the amendment of portions of its constitution.

Since Ghana returned to democratic rule in 1993, all the political parties have made such pledges of renewal through their conferences.

Although some aspiring office holders had flooded the Greater Kumasi area with their campaign posters in a bid to win the hearts of delegates, those posters and billboards had to be removed following a directive from the party for them to be pulled down.

We find the directive timely, because it is only from next year that the party can begin electing polling station officers, electoral area co-ordinators, constituency, regional and national officers. We believe that systems must be allowed to work.

That the conference ended without a hitch is a plus for the NPP and the country’s democratic growth.

Having chosen the path of democratic governance, we expect all stakeholders, particularly the political parties, to adopt this path of seamless organisation and accommodation of divergent views to ensure that the Ghana continues to remain the shining example on the continent.

Indeed, the report that some delegates were denied entry to the conference ground for not showing proof of COVID-19 vaccination is something that we all must take seriously. Fortunately, the party had offered vaccination stands to assist those who had not vaccinated against COVID-19 to do so.

The party could have chosen to ignore the safety protocol for the sake of expediency, but it chose the national good over partisanship. Certainly, this is the path we have to choose if we want to progress as a nation because partisanship does not inure to the benefit of anyone.

The Daily Graphic is aware that from next year the two major political parties, the opposition National Democratic Congress and the NPP, will be engaged in elections from the local to the national level.

It is our hope that all the political parties will be mindful of the national interest and not engage in activities that can destabilise the path of democratic governance we have all accepted for our future.

It is our desire that members of the NPP will work hard to sustain the party’s successes, and for that matter the excellence Ghana has chalked up as a beacon of hope in democratic governance.

It is our expectation that when it is the turn of the other political parties, they will equally stay united for the peace and stability of the country. That is the beauty of democracy. Democracy is not about insults and sidelining others because it thrives on diverse opinions and campaign for individual liberty and freedoms.

We congratulate the NPP once again on successfully holding its annual delegates conference and hope and pray that it remains united for the task ahead as it prepares for its internal party elections next year.