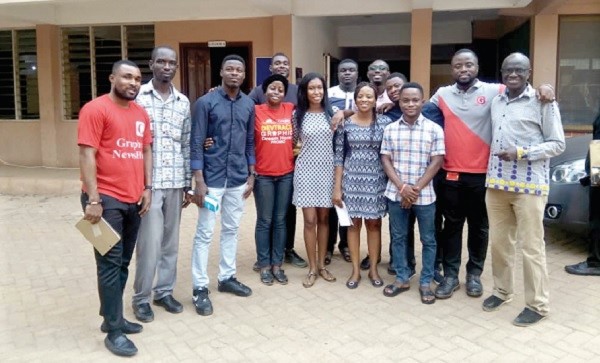 The team from the Wisconsin International University with some staff of the GCGL during a campus activation visit ahead of the competition
30.5k Shares

A team from Graphic Business on Tuesday embarked on a tour of the campuses of some universities in Accra on an activation session for the second edition of the Tertiary Business Sense Challenge which is slated for the 24th of February this year.

During the activation tour, students expressed their excitement and high hopes in winning this edition of the competition.

Speaking to Graphic Business, the Dean of students of the Wisconsin University, Mr Mamadu Gyeda, indicated, “we are excited about the challenge as it bridges the gap between academia and industry and this time we will prove that among the nineteen schools, we are number one”.

The Head of Business School of GIMPA, Prof. Bernard Obeng Acquah, disclosed that in preparing the students, they were not only trained to score high marks but to also speak confidently in public while answering questions creatively. He further stated that the challenge would project the image of the institution. Prof. Obeng also added that for him, the challenge was a good initiative “as it is one of its kind in Ghana as compared to other competitions.”

A participant from GIMPA who gave her name as Cynthia, a Level 400 student, also stated, “I hope we have a fair competition where we will be able to bring out our best in areas such as Finance, Cost Accounting, Human Resource, Business Law and other jurisdictions.”

The team lead for the Graphic Business activation session, Mr Emmanuel Sebeh, in addressing the school heads and students, encouraged them to come into the competition with their “A-game” as there were exciting packages to be won.

He disclosed that there was a GH¢20,000 insurance package from GLICO, and an all-expense educational scholarship to the USA for the winners. These packages also included laptops, electronic gadgets and other consolation prizes from other sponsors.

The Head of Department of the General Business Studies at the Wisconsin University, Mr Kwesi Addae Mensah, said that “it appears the topics are as many as 14 subjects and the time frame is not enough and therefore that should be reviewed’’.

According to him, there should be adequate time for the students to be prepared so that they can give their best in the competitions. He therefore called on stakeholders to see to it that that challenge was addressed.

A participant from the University of Ghana Business School, Ms Mary-Ann Bart-Plange revealed that, “this year, we are hoping to place first instead of fourth in the maiden edition”.

She added: “Last year, we were not so conversant with the Graphic Business terminologies so this time we are hoping to face competitors which include the University of Cape Coast who won last year and beat them to it”.

For his part, a Level 400 Accounting student of the University of Ghana Business School, Mr Divine Akpabli, announced that, “it is going to be a competitive challenge and so my expectations are that my school will emerge the winners of the challenge”.