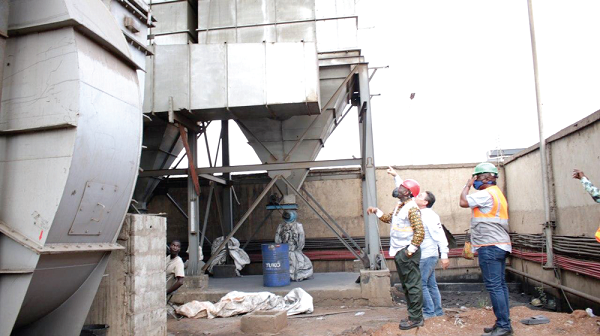 Mr Fadi Chami (not in helmet) explaining a point to Mr Herry Kokofu (hand in pocket) at the premises of United Steel. Picture: DELLA RUSSEL OCLOO

Steel manufacturing firm, United Steel Limited, says it has laid off about 400 workers, at least temporarily, as it continues to remain shut as a result of an order by the Environmental Protection Agency (EPA).

The General Manager of the company, Mr Fadi El Chami, has since raised concern about the refusal of the EPA to allow the company to resume operations until adequate pollution control systems are installed.

The EPA ordered the steel manufacturer to halt operations after the company failed to meet a July 15, 2020, deadline for the installation of a modern pollution control system in line with environmental regulations.

The Executive Director of the EPA, Mr Henry Kokofu, led a tour of the company’s facilities last Thursday to assess adherence to environmental safety standards.

Mr Kokofu, together with some senior management staff of the EPA, were on a follow up visit to some companies to assess their compliance levels in controlling smoke emissions from the furnaces at the respective facilities, as well as to check how well those companies were controlling the fume particles from sprinkling into the environment.

During the tour, Mr Chami alleged that similar pollution challenges within the Freezones enclave in Tema had been overlooked by the EPA, while United Steel remained shut.

“There are sister companies within the enclave with similar smoke emission challenges which the EPA has allowed to continue to operate, while we remain shut although we have made nearly $2 million investment into fixing the challenge, and I think this is not fair,” Mr Chami said.

Per the EPA standards, the ambient quality should not exceed 35 micro grand per metre cube in order not to compromise the air quality in the enclave.

The authority maintained that United Steel exceeded the parameters, leading to visible smoke from its system on a continuous basis.

The EPA officials maintained that sulphur dioxide (toxic gas) and oxide nitrogen, fluid gases, were emitted as a result of the melting processes and once the smoke was visible, it demonstrated that the companies were not meeting the allowable standards.

Mr Chami told the team that the company had completed work on a primary pollution control system, with work on a secondary system underway, while awaiting the arrival of experts from India.

While sympathising with United Steel, he said it was because the management of the company did not meet timelines and targets regarding compliance with the specific environmental safety conditions upon persistent complaints by other companies within the enclave.

“The issue of United Steel goes beyond the EPA, as there have been several petitions to the ministers of Environment, Interior, National Security and the Office of the President about the company, and this, therefore, requires that the challenges are addressed in the immediate before they are allowed to reopen the production units,” he said.

He said the EPA had no interest in collapsing business, and that it was rather interested in safeguarding the environment.

“So long as the environment is being protected, the company will be allowed to run,” Mr Kokofu said.

Rider Steel Limited, an adjoining company which also had similar challenges, was, however, in production using one furnace at the time of the visit, but Mr Kokofu pointed out that once the company was operating on one furnace which measured 20 tons, its emissions were within the acceptable standards.

“United Steel has two separate furnaces measuring 50 tons each, making that company’s emissions to go beyond the acceptable limits since they have no adequate pollution control systems,” he pointed out.

He warned the companies that the EPA would not compromise on the quality of the environment, hence the need for them to ensure that they worked within the given limits to address the pollution challenges.

The General Manager of Rider Steel, Mr T.P. Patnaik, assured the team that they were awaiting the arrival of their engineers from China and India to undertake installation of the tertiary filter systems they had procured to address the situation.