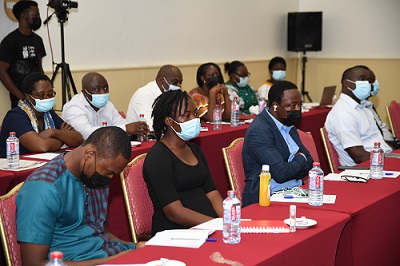 Some participants at the workshop, PIX: EBO HANSON Follow @Graphicgh

The Agricultural Policy Research in Africa (APRA) has made a case for the country to focus on public private partnership (PPP) as the best pathway to agriculture commercialisation.

It said the country stood the chance of reducing unemployment through PPPs that went beyond the one district one factory (1D1F) initiative.

This formed part of the report of a research on policy implications on how agricultural commercilisation can reduce rural poverty, empower women and girls, and improve food and nutrition security in Ghana.

The five-year (March 2017-May 2021) research was conducted by APRA and the findings which featured two key presentations was made known at a national dissemination workshop in Accra on November 30, 2021.

APRA is a five-year research programme which builds on more than a decade of research and policy engagement work by the Future Agriculture Consortium.

The aim of the project is to produce new information and insights into different pathways to agricultural commercialisation in order to assess their impacts and outcomes on rural poverty, empowerment of women and girls as well as food and nutrition security in Sub-Saharan Africa

Presenting the findings, the Coordinator, APRA Ghana Oil Palm Value Chain Research Lead, Dr Fred Dzanku, noted that one of the major challenges facing Africa and Ghana today was the issue of unemployment.

Thus, he said agriculture and the manufacturing sectors which were labour intensive had the promise to reduce unemployment.

He said there was an assumption that a transition from subsistence to commercial agric should lead to income growth and poverty reduction but that had over the years not been the case.

It emerged that there is monetisation of access to land, growing gender inequalities in oil palm production and a squeezing out of the smallholder farmer, particularly women, as well as a dissatisfaction with contractual arrangements.

He said it was important for farmers to come together to have a bigger say.

“Cooperatives were found to be weak or non-existent. Therefore training in cooperative and management principles association is still key

The second study on the long-term change and agricultural commercialisation in Ghana revealed a new set of circumstances facing cocoa farmers; if cocoa was to provide decent livelihoods, then the technical challenges of cultivating aging cocoa groves had to be faced.

The Cocoa Value Chain Research Lead, Prof. Kojo Amanor, noted that the cost of cocoa farming had increased significantly (land, labour and inputs) but these are not reflected in international prices and price fluctuations.

He said this resulted in declining profit margins, relatively high input prices and increasing strains on large numbers of farmers to intensify production with high inputs.

“Focus on raising incomes rather than maximising yields,” he said.

In an overview of the APRA research in Ghana, the Coordinator, APRA West Africa Hub, Prof Joseph Yaro, said APRA had interest in the increasing commercialisation of agric in Africa.

He said unlike previously when agric was subsistence in nature, now there was the need for farmers to increase the use of inputs from farmers own purchases, and they had to rely on markets to sell and earn some income to be able to meet their needs.

“It means that is we have an increase in commercialisation and is the ordinary farmer going to get better and be part of the inclusive network of commercial agric because the assumption is that agric should lead to better livelihoods,” he said.

Thus, he said, APRA sought to produce evidence to inform policies and investments in commercial agric to make them more effective and inclusive, and to provide a better understanding of the political economy behind agricultural commercialisation policies in the region.

“What is the evidence that this is the kind of policies strategy that is needed to bring about the kind of interventions- financial plans by banks and micro finance companies and donors to support particular agric programmes we have.

“Behind every policy are some interests and we need to understand those interests in the right way,” he said.

The APRA research was divided into three work streams and was carried out in Ghana, Nigeria, Ethiopia, Kenya, Zimbabwe, Tanzania and Malawi.