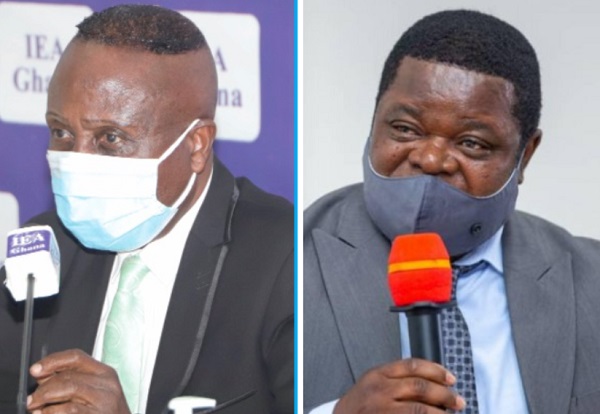 An economic research institution and a think tank have called on the government to deepen revenue generation efforts to increase inflows.

While the Institute of Statistical, Social and Economic Research (ISSER) of the University of Ghana, Legon called for the acceleration of domestic revenue mobilisation generation efforts to minimise the tendency of borrowing to finance the fiscal gap, the Institute of Economic Affairs (IEA) urged the government to plug the loopholes in the tax system.

The two institutions made the call at their separate post-mid-year budget review fora in Accra yesterday.

Addressing the media, the Director of Research at the IEA, Dr John Kwakye, said the lack of sufficient ambition in scaling up revenue had contributed to higher financial imbalances (deficit) while constraining economic growth.

He said governments had been too slow in moving the economy forward, 64 years after independence.

Dr Kwakye stressed that it was time to take bold, innovative and ambitious measures to achieve the necessary quantum jumps in the country’s development indicators.

“We need to lift our people out of poverty within a generation. The opportunity should be seized to redirect our budget projections to this end while implementing transformative policies to accelerate the development of this country,” he stated.

He said tax revenue and total revenue projections of GH¢56 billion and GH¢72 billion, respectively, for the year were insignificant.

“In GDP terms, tax and total revenue are 12.7 per cent and 16.5 per cent, respectively. These ratios compare unfavourably with those of our middle-income peers, which average of 25 per cent and 30 per cent,” he noted.

He pointed out that the country lost in excess of GH¢5 billion annually through tax exemptions.

Dr Kwakye said those exemptions were, however, subject to considerable abuse.

“The government drafted a bill to streamline the exemptions, but it has been languishing in Parliament since 2019. The political will to pass the bill seems to be lacking, ostensibly due to entrenched interests.

“Parliament needs to do the needful in passing the bill with urgency to plug a big hole in the tax system,” he said.

He reiterated his argument that property taxes constituted potentially a large pool of revenue, given the sprawling mansions in the urban areas, but they were barely collected.

Dr Kwakye, who had been calling for an improved collection of property rates over the years, suggested that a full inventory of properties be taken to ensure that market-rate taxes could be levied appropriately.

“Making property tax collection the responsibility of metropolitan, municipal and district assemblies (MMDAs) and allowing them to retain part as their internally generated funds will be a good step to boost property taxes,” he stated.

The Director of ISSER, Professor Peter Quartey, also addressing the institute’s post-mid-year budget review forum, said since there were no supplementary estimates this year, the focus was on how well the budget operation was performing.

“The first has to do with revenue mobilisation. It looks like in the first half of the year, we missed our revenue target by 13 per cent, but the expenditure exceeded target.

“But more critical are the new taxes that were introduced in the 2021 budget which we need to assess to see whether they are yielding the right revenue as expected or rather becoming nuisance taxes to businesses,” Prof. Quartey observed.

He said the assessment should also border on whether or not the taxes were “nuisance” taxes that stifled private businesses.

By the end of the year, he said, the assessment of the levies should determine whether they would continue to stay on the country’s tax books or be removed.

The mid-year budget review showed that the new tax measures, consisting of COVID-19 Health Levy and the Financial Sector Clean-up Levy, yielded GH¢249.7 million in the first half of the year, below the target of GH¢358.1 million.

Professor Quartey stated that the overall fiscal deficit of 5.1 per cent of GDP fell short marginally of the 5.2 per cent programmed for the first half of the year.

“Note that revenue accrues better in the second half of the year, compared to the first half. We, however, have to accelerate our domestic revenue mobilisation generation efforts to minimise the tendency to borrow to finance the fiscal gap,” he said.

The Ghana Revenue Authority (GRA) has started some measures to digitalise its operations. It has since integrated its tax identification numbers (TIN) with Ghana Card numbers, a process that has enabled it to identify more potential taxpayers.

The GRA has also introduced a tax stamp for excise duty products, automated the collection of taxes and reviewed its Value Added Tax system, all in a bid to improve compliance.

Prof. Quartey said given that the risk of inflation and growth had been fairly balanced, as suggested by the Monetary Policy Committee (MPC) of the Bank of Ghana, efforts to encourage financial institutions to lend to productive sectors of the economy would be key.

In spite of those positive developments, a further decline in the lending rate was expected in order to stimulate private businesses and promote growth and employment, the economist and researcher said.