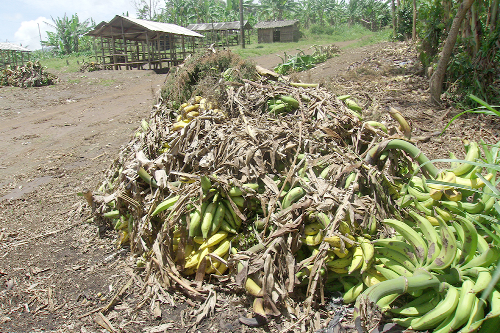 The challenge of post-harvest losses (PHL) plays a negative role in food and nutrition security, a review of the levels of PHL has revealed.

The analysis of the PHL levels for some key commodities such as rice, yam, cassava, cowpea, tomatoes and millet, indicated that in 2016, close to 25 per cent of the value of production (about GH¢2 billion) was lost to PHL.

The review dubbed, “Is there Money in Reducing PHL in Ghana? – An Estimation of Consumption of Selected Food Commodities”, was undertaken by the International Institute of Tropical Agriculture (IITA).
Post- harvest Losses

PHL is an old age challenge to the agriculture sector in Ghana that threatens food and nutrition security.
It is the measurable losses in edible food quantity or nutritional value (quality) of food intended for human consumption.

Simply put, food loss is food that is available for human consumption that goes unconsumed.

The review said that among the commodities, the average PHL levels ranged between five per cent and 49 per cent of volume of output, which obviously depresses the volume of production that is available for consumption.

“The former requires increases in the quantity of food produced and available for consumption and this is where the challenge of PHL impact negatively,” it stated.

It is important for all stakeholders, including the private sector, to become more involved in efforts that can lead to the reduction of PHL.

For instance, the private sector can profit from investing in different parts of the value chain that can lead to the successful sale of products to consumers as opposed to the products being lost post-harvest.

According to the review, the private sector’s involvement can be in the form of selling PHL reducing / processing equipment or materials to farmers.

“The private sector can partner with the Ministry of Food and Agriculture and research institutes in the country to produce and market PHL reducing technologies developed by the institutes,” it said.

“The sector can also participate in these value chains by setting up processing plants that can convert the farm produce into marketable forms that have longer shelf life,” it advised.

A review was also carried out on household and industrial consumption of selected food commodities to get a sense of the kinds of revenue that can accrue from improving the shelf life of raw produce or processing them into value-added forms.

Among the commodities reviewed, yam, fish and cassava, experience the largest losses in monetary terms (the 2016 value of production at farm gate prices) and their losses were GH¢987 million, GH¢733 million and GH¢576 million at the national level.

Maize and tomatoes equally had relatively high monetary losses at GH¢229 million and GH¢143 million as a whole.  Overall, the losses ranged from nine million cedis for okra to GH¢987 million for yam.

“These losses give an indication of what farmers stand to gain should PHL be reduced and this will equally influence the price they are ready to pay for PHL reducing products that lead to such additional revenue,” it said.

In order to assess the level of demand for processed commodities using data from the Ghana Statistical Service (GSS), it emerged that for the commodities under consideration, national household demand for their processed forms is equally sizeable.

They range from GH¢1.2 million for beans-based cerelac to GH¢787 million for processed cassava with tomatoe paste coming very close at GH¢748 million.

“This shows possible revenues that can accrue from processing commodities which may be lost post-harvest. The consumption of some food products that use and can use significant quantities of locally grown crops is equally worthy of note,” it said.