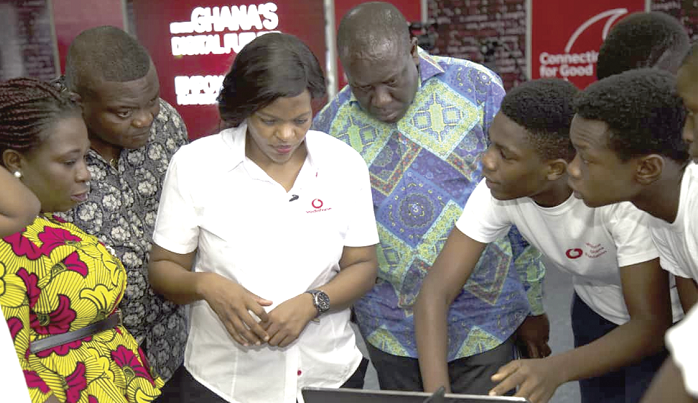 programme is aimed at giving young people hands-on skills in coding so that they will be able to participate in building applications, websites other social enhanced technological devices and add on to the growth of the economy.

The Chief Executive Officer (CEO) of Vodafone Ghana, Ms Yolanda Cuba, at the launch of the programme, said: “If you have young people who do not have in coding, which is the basic language in order to partake in the new technology world, we will fall short in igniting Ghana’s digital revolution.”

She indicated that as the world was swiftly moving into a more advanced digital one where artificial intelligence (AI), robotics and internet of things (IoTs) would be reshaping businesses, there was the need to be creators, not just consumers of technology.

That, she said, would usher the nation into a narrative around Ghana being the digital hub for West Africa.

“If we do not want to just be consumers but creators of technology, there is the need to have an understanding of the basic language, which is coding, so that we will be able to write applications which can be used in the future,” she added.

She explained that as part of the support to in its digital transformation programme, Vodafone Ghana was giving 1,000 young people across the country the opportunity to be trained in coding.

“This is our quest to ensure that we are actually supporting the vision of government to make sure that the country is moved in a digital direction,” she added.

A Deputy Minister of Communication, Vincent Sowah Odotei, in his address, said coding was the future of a very complex and yet transformative digital world.

He observed that coding would become one of the mainstream courses for every student as the nation moved into a future of .

“Mass acceptance of will eventually make coding one of the key requirements in schools’ curriculum, just like other subjects such as language,” he explained.

He added that the Ministry of Communication welcomed the coding programme because it was consistent with its vision to promote among citizens in the country in all forms, including making coding viable and accessible to all.

“That is why I was thrilled when I that Vodafone has taken the lead in this light to partner us in delivering this mandate for the youth in Ghana. When we are able to transform the lives of the Ghanaian youth through coding, our future world of technology, as a country, will be in safe hands,” he added.

According to him, coders were reshaping the world through disrupting and demystifying previously existing myths in technology and innovation.

“Coders are making the world a better place and it is fulfilling that our youth can get this same opportunity to do the same with the empowerment that it brings,” he explained.