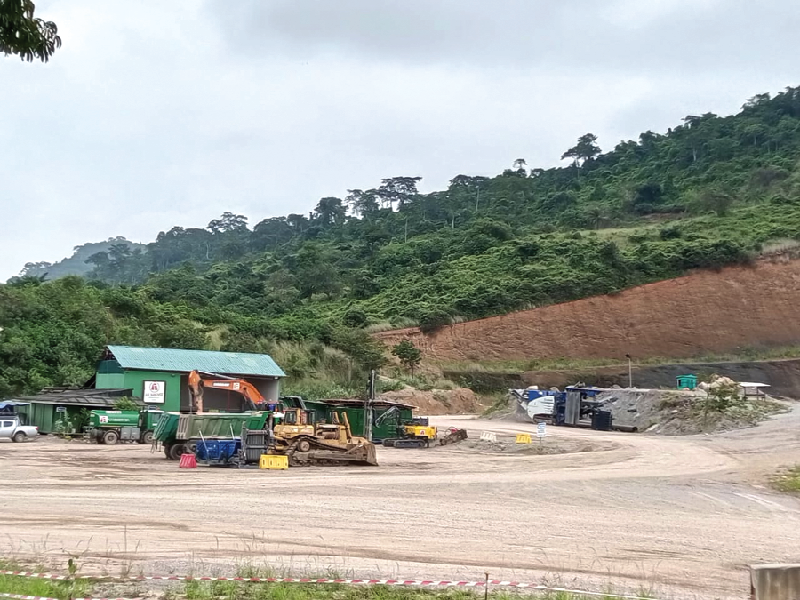 A limestone mining site at the Odugblase in the Eastern Region.
30.5k Shares

For two decades, limestone miners in the Yilo and Manya Krobo municipalities have defaulted in the payment of royalties and concession rent.

This has led to a trail of environmental degradation, poverty and widespread of diseases in the municipalities.

On September 24, 2004, when the first mine was commissioned, it was all joy that limestone (a primary component for cement manufacturing) had been discovered in the community.

Unfortunately, the dreams of the locals have turned into a nightmare as the reality is miles short of what they had hoped for.

Information sourced from the Minerals Commission (MC) showed that only five companies are licensed to quarry limestone in the Manya-Yilo enclave in the Eastern Region.

The Minerals and Mining Act (MMA) 2006 (Act 703) stipulates that mining companies are required to pay five per cent of total mining revenue as mineral royalty to the government.

In this case, the Minerals Income Investment Fund (MIIF) under the Act, 2018 (Act 978), is the recipient of the fund.

In practice, MIIF retains 80 per cent and disburses 20 per cent of it to the MC and the Office of Administration of Stool Lands (OASL), which is responsible for deploying it directly to traditional authorities and local government for the provision of developmental amenities.

A request made to the OASL office in the Eastern Region pursuant to the Right to Information (RTI) Act, 2019 (Act 989), showed that only two companies, Agyapaddo and Ter Quarry were on record to have paid some money in the form of rent.

Moreover, both companies have defaulted in payments for two years and five years respectively.

An Elder of the Paramountcy at the Manya Traditional Council, Nene Samuel Sakite, in an interview, said the traditional council was yet to receive any royalties since mining started in the community.

He explained that the council was having challenges accessing the royalties due from quarry operation in the area.

He stressed that the council had been unable to access either royalties or a development fund set up by the benevolence of GHACEM for over two decades of these operations.

“We have been engaging GHACEM for years but to no avail. Fortunately for us, the new management of GHACEM has restarted negotiations with us on royalties, development funds and conveyance fees for the area,” he said.

He said this engagement was being championed by a tripartite committee composed of members from Yilo, Manya Krobo and GHACEM.

A youth leader in the community, Justice Kweku Sangmor, said: “We heard that GHACEM would provide us with social amenities such as health and educational facilities, as well as improve social infrastructure in all the surrounding communities but we are yet to see it manifest.”

He said the general notion was that these social amenities and infrastructural development could create enabling environments for alternative livelihood opportunities at Odugblase.

“Between 2004 and now, the limestone quarry activities have expanded beyond Odugblase to Yongwa, Popotia, Yokuhe, and Ponpong, among others, both in the Yilo and Manya Krobo municipalities, and the number of companies too had increased,” he said.

When the team visited the host communities on June 24 and 25, July 9, August 27, and September 15, this year, it noticed that tipper trucks were actively transporting aggregates believed to be limestones from concessions of the aforementioned firms.

Due to the deplorable nature of the roads, one could hear the loud noise of the bumpy trucks. The winding roads in the communities are untarred, dusty and undulating.

From a distance of 200 metres, the team could feel the thundering rumblings of moving trucks loaded with limestones.

Most of the landowners in the communities who interacted with the team complained about the periodic loud blasts which left various degrees of damage on their buildings, including structural cracks.

Some cracks run from the foundation to the roof of the buildings.

These communities, unfortunately, have not seen any major economic development over the past decade since commercial quarry activities commenced.

Bad road networks, no jobs, and infrastructure deficit among others are very visible in the area.

Since the firms do not process the limestone into cement in the community, there is limited employment opportunities at the mining sites.

Unfortunately, these local people do not have the requisite skills to apply for the few skilled jobs that the firms could offer in the community.

Petty trading is therefore common, engaged in mostly by women who buy farm produce in remote communities and transport it to nearby cities such as Koforidua, Somanya, Odumase and Asesewa to sell.

According to a report by the Environmental Science Programme, Faculty of Science, University of Ghana, using dust sampling tests in the affected communities of limestone quarry in the Manya Krobo area, values recorded were above the Environmental Protection Agency (EPA) Ghana daily guideline level.

The Manager of the Klo-Begoro Community Mines, Foster Djaba, in an interview confirmed that Klo-Begoro was in active operation in the community.

However, he debunked claims that it was not licensed and hence not paying royalties to the state.

"We are not in arrears of royalties and ground rents because anytime we supply, we make sure we pay royalties.

“We pay conveyance, permit, and community levy to the assembly but we pay the minerals royalties to the Minerals Income Investment Fund (MIIF) and concession rent to stool lands at the OASL in Accra. The last time we paid was last year, 2021, after compiling it,” he said.

Requests made to the firm to produce evidence of payments via phone calls and WhatsApp messages have not been forthcoming though assurance was made in a phone call.

For his part, the Administration Officer of Poponya-Dornya, Joseph Nartey, mentioned that his company had actively started carrying out quarrying in the area upon receipt of the license only recently.

"We only had our mining permits in August 2022 and so we are yet to file our royalties and ground rent,” he said.

All efforts to establish contact with the rest of the companies for their response proved unsuccessful.