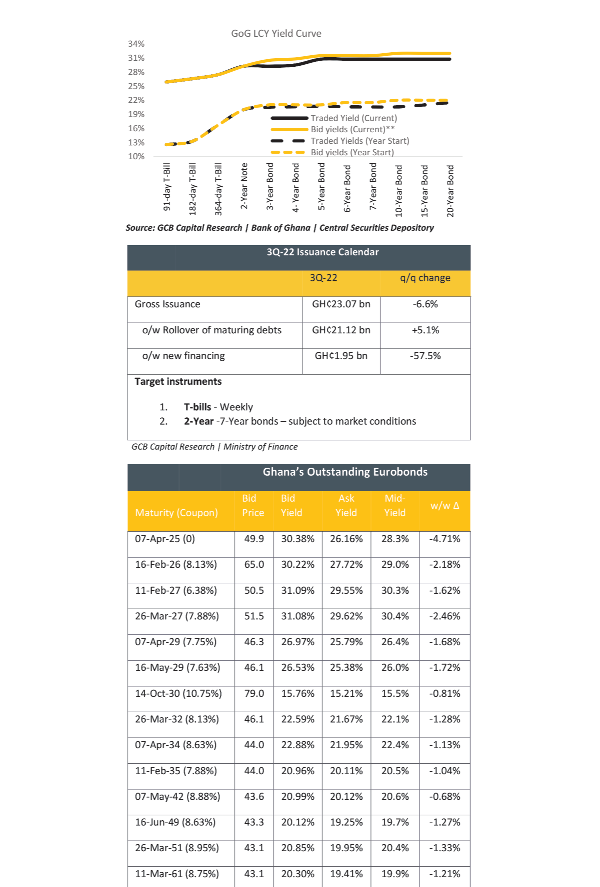 The liquidity challenges in the economy appear to be fading as auction failures continue to reduce.

Total bids and uptake at the auction amounted to GH¢1.097 billion compared to a target of GH¢823mn.

The amount was raised across the 91-day and 182-day bills.

The uptake exceeded the maturities due for last week by 42 per cent as the government sustained its short-term financing strategy amidst the punitive interest rate environment.

These reflected the high inflation profile and the lingering near-term economic uncertainties facing the economy.

Given the 300 basis points hike in policy rate and the additional policy measures rolled out by the Bank of Ghana (BoG), we envisage tighter cedi liquidity conditions going forward.

Thus, the interbank interest could reach 23 per cent over the next four weeks while the benchmark 91-day bill yield could climb near the 30 per cent level by the close of the third quarter.

GCB Capital expects the initial price guidance on August 23, ahead of the opening of the order book at midweek.

Our audit of the tenor reveals that resident investors' holding of the maturing paper stands at almost 90 per cent.

Given that the tenors on offer match market appetite, we believe the rollover offer can attract decent demand around the 32 per cent yield level.

The government will target raising GH¢1.17bn on the money market across the 91- day to 364-day tenors to refinance upcoming maturities worth GH¢1.02bn.

Given the anticipated tightening of cedi liquidity and the competing offers, this auction could clear at significantly higher yields.

The volume traded last week amounted to GH¢1.62bn. This indicates a decline of 8.4 per cent over the previous week.

Last week’s trade was dominated by short and medium-term tenors with a residual tenor not more than five years, which accounted for 75.9 per cent of the aggregate turnover for the week.

Inflation expectations could remain elevated for the remainder of 2022 as the pass-through effects of cedi depreciation and the impact of the significant utility tariff review linger.

The inflation risks and the government’s immediate financing problem will sustain the bearish investor sentiments and keep local currency yields on the front foot.

Thus, we expect domestic investors to stay short on the cedi curve, favoring the mid-duration maturities to optimise portfolio returns.

On the monetary side, the Monetary Policy Committee (MPC) of the Bank of Ghana (BoG) concluded an emergency meeting held on Wednesday, August 17, with a 300bps hike in the policy rate to 22 per cent.

Additionally, the committee announced a phased increase in the primary reserve requirement to 15 per cent from 12 per cent over the next three months.

The committee also reviewed the emerging threats to inflation following a fortnight of sharp cedi depreciation and a significant increase in utility tariffs amidst lingering fiscal vulnerabilities.

The MPC assessment revealed that the risks to inflation from the cedi’s bearish run pointed to the upside and translated into relatively more substantial underlying inflationary pressures.

BoG’s cedi-US dollar reference rate recorded a sharp depreciation of 6.51 per cent as of August 22 and fell by more than 15 per cent against the USD in the retail market over the same period.

The currency pressures have kept ex-pump petroleum prices elevated in spite of the significant easing of crude oil prices on the world market.

This sustains the upside risks to inflation.

We believe the anticipated pass-through effect of the prevailing currency pressures and the price effects of the utility tariff review have altered the inflation profile.

Thus, the economy could be in a dire situation going into the fourth quarter. Additionally, we note that the prevailing macro-fiscal uncertainties have significantly challenged budget financing, and the recourse to central bank deficit financing could prolong the inflation peak point.

Under the circumstances, inflation could run hotter for a while before tapering off slightly to 32 per cent by full year of 2022, which should keep nominal interest rates elevated.