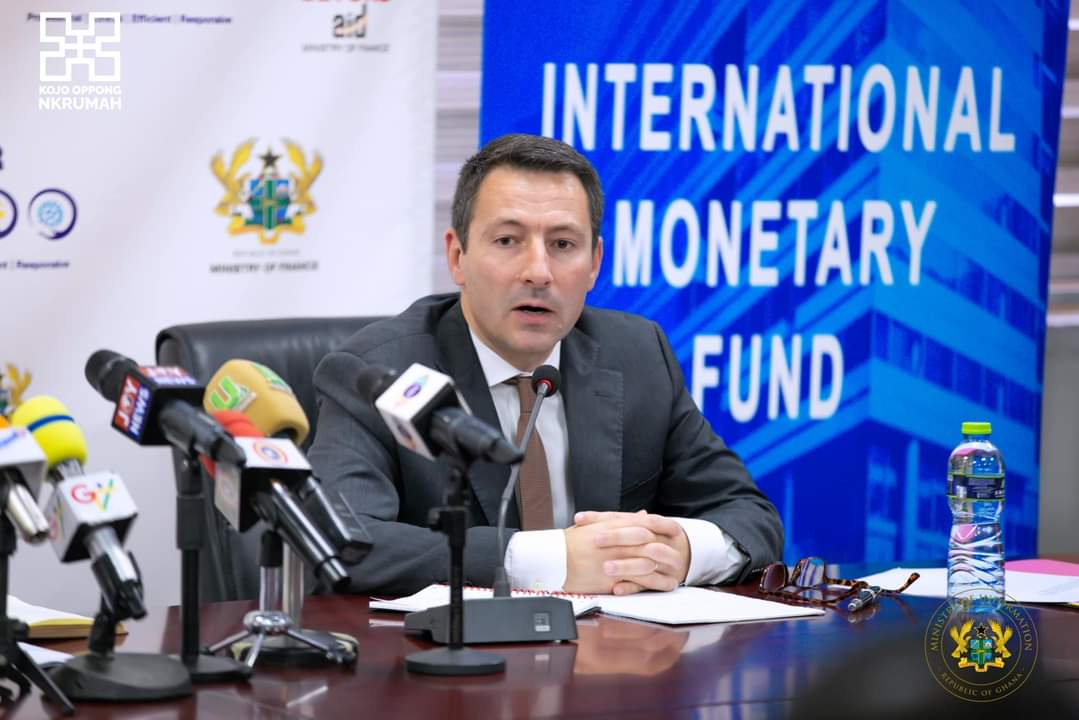 Ghana has secured a preliminary agreement with the International Monetary Fund (IMF) for the injection of $3 billion into the economy over the next three years.

The IMF support and the attendant programmes are to help stabilise the economy and correct fiscal and monetary imbalances that have caused the Ghana cedi to depreciate and the prices of goods and services to rise.

The staff-level agreement (SLA) for an extended credit facility (ECF) was announced yesterday at a press conference jointly addressed by the government side and the IMF Mission.

institution to reboot the economy.

However, the country will now have to show sufficient proof that it has instituted concrete measures to bring the debt to sustainable levels before the management and the Executive Board of the IMF can approve the deal for a tranched disbursement of the funds to commence.

In a statement announcing the SLA yesterday, the IMF Mission Chief to Ghana, Stéphane Roudet, said the preliminary approval would be presented to the IMF Management and Executive Board for final approval after Ghana had made significant and sufficient progress with efforts to restore debt sustainability.

The final IMF approval is also contingent upon receipt of the necessary financing assurances by Ghana’s partners and creditors.

Again, the country is required to execute measures to increase domestic resource mobilisation and streamline expenditure.

"To support the objective of restoring public debt sustainability, the authorities have announced a comprehensive debt restructuring. Sufficient assurances and progress on this front will be needed before the proposed fund-supported programme can be presented to the IMF Executive Board for approval," the IMF statement said.

The announcement of the SLA followed five months of negotiations between the government and the IMF over a set of policies and programmes needed to restore debt sustainability and general macroeconomic stability for prices and the local currency to stabilise.

At the joint IMF and Ministry of Finance press conference in Accra yesterday, the Mission Chief to Ghana said the next significant step was for the government to get the assurance of the country’s creditors that they would support the restoration of debt sustainability.

“What is necessary for us to be able to present that programme request to the board are the assurances from Ghana’s partners and creditors that the programme is fully financed and that the comprehensive debt restructuring that the authority (the government) has launched will be sufficient to re-establish debt stability.

“Soon as we have assurances from the creditors, we will be able to present that to our board,” Mr Roudet said.

Ghana's debt was assessed to be unsustainable, prompting efforts by the government to restructure the stock to help qualify for the IMF support.

A domestic debt exchange programme was launched on December 5 to trade GH¢137 billion of locally issued cedi bonds for four new bonds that will mature between 2027 and 2037.

As efforts to convince domestic investors to accept the deal continue, the Finance Minister, Ken Ofori-Atta, said a restructuring of the foreign component would commence this week although he did not mention the specific timelines and details of the programme.

Mr Ofori-Atta described the preliminary approval as historic, given that it was secured in record time.

The Finance Minister said unlike Zambia, Chad and Ethiopia that took longer periods to secure SLAs, Ghana used less than six months to get the same agreement with the fund.

According to him, it was an indication of the speed with which the country's request was worked on by the IMF team.

He commended the IMF team for the effort and promised to take the same momentum into the debt treatment programme to enable the fund to issue Ghana a final approval.

He assured the fund and the investor community that Ghana was ready to complete all prior actions before March 2023.

“But more importantly, Ghana is committed to the IMF programme as a whole. The SLA is only one aspect of the approval process. More is yet to be done to secure IMF Management and Board approval,” the Finance Minister said.

Mr Ofori-Atta urged labour and the country to rally behind the government in an effort to make the IMF programme a success.

He also promised to work transparently with the country’s creditors to help secure their buy-in for the debt treatment exercise needed to secure the IMF Executive Board approval.

“We can only get to the IMF Board approval if we get sufficient commitment from our creditors in support of the debt operation”.

“We hope that Ghanaians will continue to support all efforts to restore macroeconomic stability and promote robust and inclusive growth,” he said.

A Professor of Finance, Godfred Alufar Bokpin, and the Chief Executive Officer of the Association Ghana Industries (AGI), Seth Twum-Akwaboah, described the preliminary agreement as a major breakthrough in the efforts to secure an IMF bailout.

“It is a first major breakthrough for us and it gives the economy a lifeline,” Prof. Bokpin, who is a Senior Lecturer at the Economics Department of the University of Ghana, Legon, said in an interview.

He, however, stressed that the country now needed to work harder on the debt restructuring to be able to secure a full IMF programme.

Prof. Bokpin said the SLA would strengthen the arm of the country as it engaged external creditors on a debt restructuring to bring the stock to sustainable levels.

He, however, warned that a full IMF programme could delay if negotiations on the debt restructuring delayed.

“It can delay based on how they handle the debt restructuring. If they handle the external one the way they handled the domestic one where there was less or lack of engagement, then it creates problems.

“Debt restructuring will impose some losses on the creditor and so you do not adopt an authoritative approach to it; you engage the creditors on everything,” the professor of finance said.

“The terms must make sense; they must not be lopsided but fair such that the adjustment between fiscal and debt restructuring is not such that the bulk of the burden is placed on creditors,” Prof. Bokpin said.

For his part, the Chief Executive Officer of AGI said the SLA was a first step to bring confidence back into the economy and the association welcomed it.

On the debt restructuring, Mr Twum-Akwaboah stressed the need for broad consultations with relevant stakeholders to help secure their buy-in.

“At this moment, some amount of adjustment from everyone is important but we need to think through it properly and take the kind of arrangement that will not create further problems, but will enhance whatever we want to achieve,” Mr Twum-Akwaboah said.