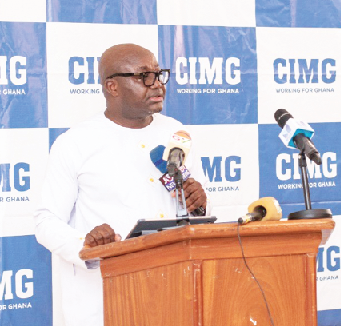 The Chartered Institute of Marketing, Ghana (CIMG), has released its maiden Customer Satisfaction Index (CSI) report, with 11 banks being rated 5-star for their service quality.

Out of the 11 banks, only three of them were local banks. Ten other banks also earned 4-star status.

With service quality as the main tool used for establishing the CIMG-CSI, the accepted cut-off point was performance greater than 70 per cent.

The study established an overall CIMG-CSI Performance Index of 95 per cent for service quality, for which only two banks crossed the threshold. The 95 per cent score was based on the average performance of the top-five banks.

The CSI report findings also indicated that in terms of behavioural and emotional loyalty, none of the banks recorded five-star ratings, with the overall customer loyalty score being 73 per cent.

The researchers described this situation as worrying, and, therefore, urged banks to pay attention to customer loyalty, as a strong customer loyalty could translate into positive market shares, increased income and profit.

The study also aimed at establishing a baseline index for Ghana as a starting point to the eventual establishment of the GH-CSI in subsequent editions, when many other industries would be captured.

The banking industry was chosen for the maiden study as a result of it being well-regulated and for which the regulator exercises much control to be able to ensure the maintenance of minimum quality standards.

Subsequent studies will build on this baseline index, which surveyed 2300 retail consumers on the banking premises of Ghana’s 23 universal banks across four major markets (Accra, Kumasi, Tamale and Takoradi).

Speaking at the launch of the index, the National President of CIMG, Dr. Daniel Kasser-Tee, said the report served as an important complement to traditional measures of economic performance; providing useful information for banks, their shareholders, investors, government, regulators and, most importantly, consumers.

He urged all the 23 universal banks to subscribe to this report, which would be produced annually, adding that the findings would be very useful in shaping their decisions and actions on the three important study variables.

“Understanding the behavioural intentions of customers has financial consequences, as they affect income statements immediately, and subsequently balance sheets. Each bank will also see how they performed against their peers and industry averages.

“We are excited about the fact that Ghana is today leading countries in the sub-region, joining the likes of South Africa to establish this index on the continent. I assure you that the CIMG-CSI will help product and services organisations in Ghana to improve service quality standards,” he stated.

The Head-Financial Stability of the Bank of Ghana, Dr. Joseph France, for his part, said the regulator was excited about the CSI report, as it sought to improve customer service delivery in the banking sector.

He said the central bank would continue to ensure that the interests of consumers in the banking sector were protected.

“This report will be a tool/reference document for the BoG to use in its regulatory work to better address customers’ challenges with their banks, as well as a tool for banks, on the other hand, to use in improving their services and products to clients,” he said.

A Consultant at the Ghana Association of Bankers, Mr. Daniel Opare, also noted that as the association sought to position the industry as world-class and customer-oriented one, the rationale and importance of the index could not be exaggerated.

“We are confident that the banking industry will tap into the expertise and partner CIMG to broaden the industry’s skills, and understand customer needs to deliver relevant innovations, particularly during these challenging times.”

In his concluding remarks, the chairman for the occasion, Mr. Alhassan Andani, said the discipline that had gone into the survey was tall and spoke lots of volumes.

“If a segment is not significant in your market currently, take it as the litmus test of your service standards. This is the voice of your customer, so I would only want to reiterate that you will dismiss this study at your own peril,” he stated.