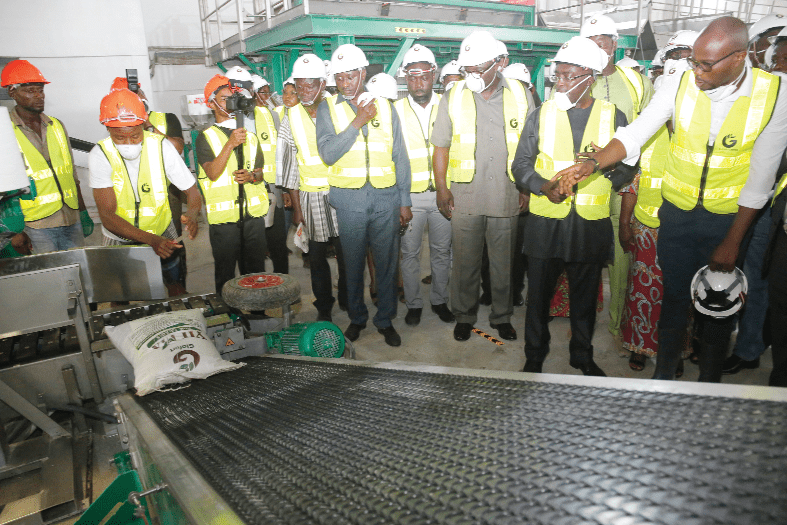 A new fertiliser blending plant, with the capacity to produce 2,400 tonnes of fertiliser a day, has been commissioned at Asuboi in the Ayensuano District in the Eastern Region.

The plant, an initiative of Glofert Limited, a private company, was constructed at a cost of $4.5 million to provide tailor-made blended fertilisers to meet specific soil and crop needs.

It falls under the  One District, One Factory (1D1F) initiative, and it is said to be the largest fertiliser blending plant in the country.

He, therefore, challenged the Ministry of Agriculture and the Ghana Cocoa Board not to waste foreign exchange in importing fertilisers.

Dr Bawumia described the factory as another major step towards achieving the vision of President Nana Addo Dankwa Akufo-Addo to build a Ghana beyond aid and said the government had been keen on delivering the 1D1F promise to the fullest to create a viable self-sustaining economy.

Dr Bawumia, however, said one of the means to achieve that promise was through modern industrialisation in order to reduce the country’s dependency on the outside world for its food needs.

“The 120 tonne per hour fertiliser blending factory is the largest in terms of production capacity in the country under the 1D1F initiative of government and it is another major step by the government to work with the private sector to transform the Ghanaian economy through agriculture and to revamp the industrial sector,” the Vice-President added.

Dr Bawumia said Ghana must guarantee its food security by empowering farmers to achieve that goal through increased supply of inputs such as seeds and fertilisers to farmers at a reasonable price because all over the world the availability of food ensured peace.

Apart from guaranteeing food security, he explained that the 1D1F policy also aimed at transforming the structure of the Ghanaian economy from one that depended on production and export of raw materials to one of value addition.

To that end, he said the 1D1F, when well implemented, had the potential to move the country forward from the grass roots towards self-sufficiency and the achievement of the Ghana Beyond Aid agenda.

The Vice-President also mentioned some tax incentives approved by Parliament to cover various tax exemptions for companies seeking to operate under the 1D1F programme.

He mentioned them to include a five-year tax holiday; waiver of import duties and taxes on equipment, machinery and parts; waiver of duties and levies on raw materials, and a waiver of payment of withholding taxes.

In addition to the tax incentives, he said there were existing laws to entice foreign participation, including assurance of the repatriation of profits, dividends and guarantee against nationalisation.

While announcing a number of ongoing projects under the 1D1F, Dr Bawumia said there were 181 1D1F projects at various stages of implementation of which 57 projects as of late 2019 were in operation, with 22 under construction.

“Construction for an additional 33 projects in addition to 56 small-scale processing projects under the Enable Youth Initiative financed by the African Development Bank (AfDB) will begin across 56 districts before the end of this year,” the Vice-President added.

Explaining further, Dr Bawumia said the demand for fertiliser had seen a major increase over the last two years with statistics indicating that there was an 85 per cent increase in fertiliser consumption in 2017 as compared to 129,000 tonnes in 2016.

The entry of Glofert Limited, the Vice-President said, meant farmers did not have to depend on the blanket off-the-shelf fertilisers anymore because they could now be assured of having fertilisers specifically tailored to their soil type which would surely improve their yield significantly.

A Deputy Minister of Agriculture, Dr Gyiele Nurah, said there was a conscious effort by the government to promote food production in abundance through its flagship Planting for Food and Jobs programme.

As a result, he said one million farmers had been targeted to be supplied with fertilisers by the close of this year.

The Chief Executive Officer (CEO) of Glofert, Rev. Foster Mawuli Benson, commended the government for the effort to make agriculture more attractive through the  Planting for Food and Jobs.

He said the plant had been strategically positioned to benefit other partners in the fertiliser supply industry.

He expressed appreciation to the company’s partners for their immense support and gave an assurance that the factory would create more jobs for the people within the area and beyond.