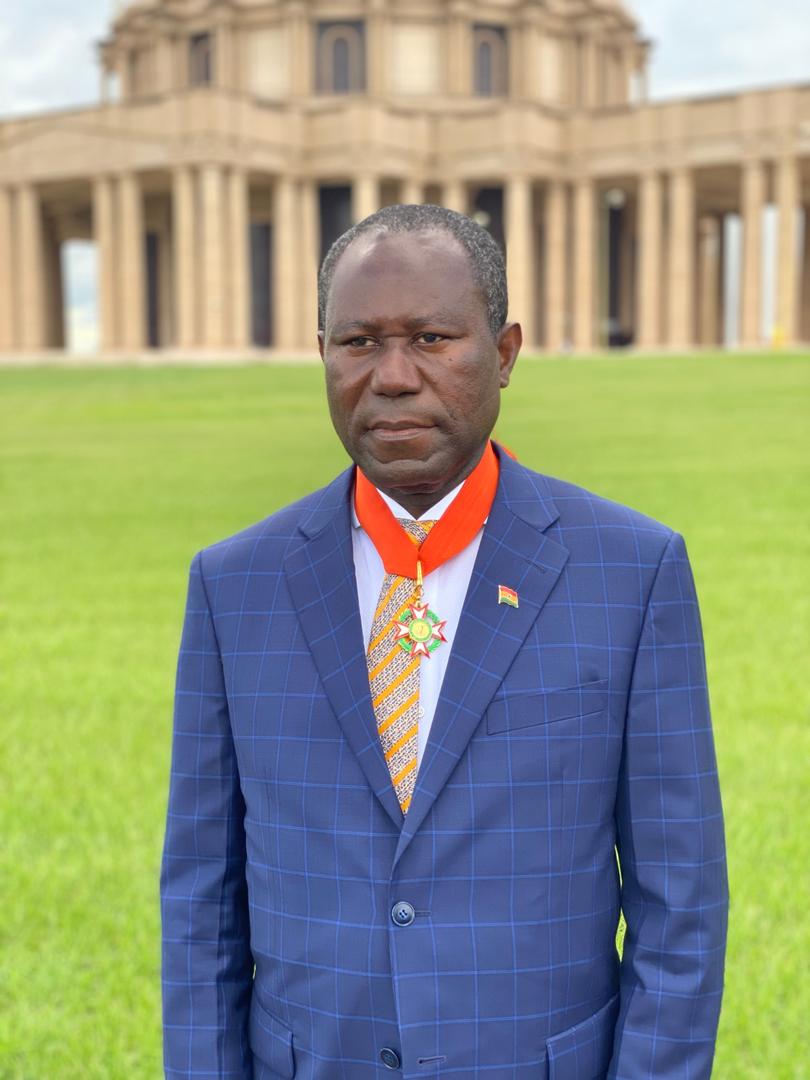 The Chief Executive Officer (CEO) of the Ghana Cocoa Board (COCOBOD), Mr Joseph Boahen Aidoo, has pledged to deepen the collaboration between Ghana and Cote d'Ivoire in the cocoa sector to help improve the incomes and livelihoods of cocoa farmers in the two countries.

Mr Aidoo made the pledge yesterday after he had been honoured by the President of Cote d'Ivoire, Mr Alassane Ouattara, for his contribution to the introduction of the living income differential (LID).

President Ouattara conferred the National Award of Commander of the National Order of Cote d’Ivoire at a ceremony in the Ivorian capital, Yamoussoukro, to mark this year’s edition of La Journee Nationale du Cacao et du Chocolat (the National Cocoa and Chocolate Day), the Ivorian equivalent of Ghana’s Cocoa Day celebration.

The award is mainly reserved for individuals who have distinguished themselves in service to the Ivorian nation and was conferred on Mr Aidoo for leading the joint Ghana/Cote d’Ivoire negotiations to secure a new cocoa trading mechanism — the LID — for the two countries.

The COCOBOD CEO received the national award, along with his counterpart in Cote d’Ivoire, the Director-General of Le Council du Caffe-Cacao (CCC), Mr Ibrahim Kone Yves, who was also rewarded for playing a significant role in the process leading to the achievement of the LID.

Mr Aidoo expressed his profound gratitude to President Ouattara for conferring on him the high national honour.

He described the award as the “greatest recognition” he had obtained in his life.

He also paid glowing tribute to Mr Yves and his team for their contribution to the successful adoption and implementation of the LID.

According to Mr Aidoo, the LID was the greatest legacy of Presidents Nana Addo Dankwa Akufo-Addo and Ouattara and noted that its sustenance depended on the continued cooperation of the two countries to consolidate the gains and reach for higher goals.

He assured President Ouattara of Ghana’s commitment in that regard.

Meanwhile, a statement from COCOBOD quoted the Minister of Agriculture and Rural Development of Cote d’Ivoire, Mr Kouassi Adjoumani, as saying at the event that Ivorian cocoa farmers owed President Akufo-Addo and Mr Aidoo a debt of gratitude for their work to improve the living standards of cocoa farmers.

He said although the COVID-19 pandemic had negatively impacted all sectors of the economy, including the price of cocoa, the LID had ensured that the incomes of cocoa farmers in Cote d’Ivoire were protected.

The statement said the minister expressed his “solemn appreciation” to Mr Aidoo and congratulated him on the national award.

President Ouattara recounted the discussions he had had with President Akufo-Addo, which had culminated in the achievement of the LID.

The LID arrangement ensures that buyers of cocoa from the two countries add $400 to every tonne of cocoa bought.

The statement said President Ouattara used the occasion to announce an increase in the producer price of cocoa in Cote d’Ivoire for the next crop season.

He said the increase in price had only been made possible by the LID.

Ghana had earlier increased its cocoa producer price by 28 per cent.