Cedi regains over 61% of value 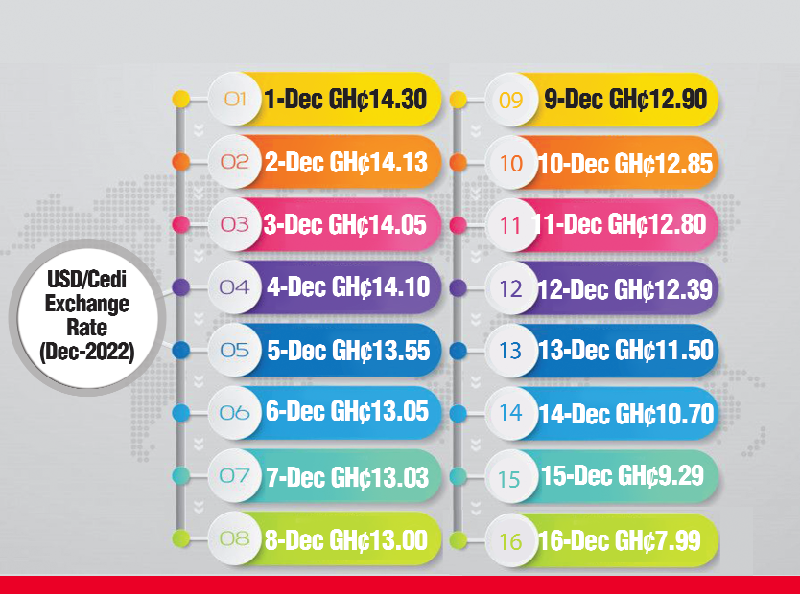 The Ghana cedi has regained more than 61 per cent of its value against some of the country’s major foreign trading currencies, particularly the United States dollar.

The currency had lost up to 54 per cent of its value at the end of November, making it one of the worst performing currencies in the world.

Being largely an import driven country, the battered Ghana cedi heavily impacted inflation rate and exacebated the cost of living and drastically increased the operational costs of business across board.

However, as at the end of Friday, December 16, the average interbank rates used by the commercial banks for transactions and published by the Bank of Ghana saw the local currency advertised at GH¢7.99 (buying) and GH¢8.0 (selling) for one US dollar for instance.

The buying and selling rate of one British pound was GH¢9.72 and GH¢9.73 respectively.

For the Euro, the buying and selling rates were GH¢8.48 and GH¢8.49 respectively.

The development has caused many to heave a deep sigh of relief as it is likely to restore hope and confidence in the economy while allowing for proper planning.

Why is cedi appreciating

The Bank of Ghana (BoG) has attributed the cedis’ recent gains to a new set of monetary measures it has instituted.

According to the Director of Financial Markets at the BoG, Stephen Opata, the cedi’s performance could be linked to the BoG’s decision to restrict foreign exchange support to some essential commodities such as petroleum products, as well as medical and pharmaceutical products.

He added that the cedi’s gains could also be attributed to the prudent management of liquidity in the financial system.

“We have also seen that Monetary Policy has been tightened, coming on the back of recent increases in the policy rate to 27 per cent. This has also contributed to the cedi’s good run,” he added.

He noted that “the continuous hike in the policy rate will also ensure that excess cedis can be used to purchase government bonds and other securities, despite current concerns with the proposed debt exchange programme”.

Mr Opata, as reported by MyJoyOnline at the weekend, is of the view that these could be some of the major reasons that have contributed to the cedi’s stability against the dollar over the past three weeks.

Many currency analysts have maintained that sustaining the cedi’s performance will not only depend on the supply of the currency but largely on the success of the ongoing reforms in the economy.

They have argued that much as the government and the IMF have not fully settled on the conditions for a bailout, the SLA was a good signal to the market.

From the development, they also want the BoG to use stringent measures to stop speculations in the system and intensify its efforts to clamp down on Black Market operations, which also influence the performance of the local currency.

They also asked the government to work towards ensuring that the measures announced in the 2023 budget to develop the local market to produce more for local consumption and cut imports were strictly followed to reduce the pressure on the cedi.