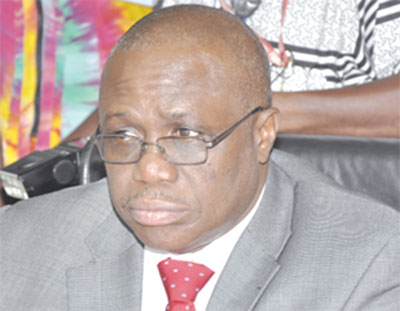 Business in the country received less credit from commercial banks and other financial institutions in the first quarter of this year compared to the amount given them in the same period last year, a survey by the Bank of Ghana (BoG) has found.

It indicated that credit to the private sector slowed to 28.7 per cent in the first three months of 2013 from the 44.6 per cent recorded last year.

BoG’s findings are in line with an early report from the Association of Ghana Industries’ Business Barometer Survey (BBS) which found that access to and cost of credit remained a major huddle to businesses in the country in the first quarter of the year.

Speaking at a press conference in Accra on May 22, Governor of the Central Bank, Dr Henry Kofi Wampah, said “the latest BoG credit conditions survey showed a general net tightening of credit conditions.”

“With the exception of consumer credit which saw some easing, all credit stance for all other loan types, including SMEs, large enterprise, short and long term loans were tightened in the period,” the Governor said prior to announcing an upward adjustment of the bank’s policy rate.

The policy rate, which serves as the reference point for commercial banks in the calculation and setting of interest rates in the country, was raised from 15 per cent to 16 per cent on the back of mounting pressures on inflation and the cedi.

With the policy rate now adjusted upward by the 100 basis points, indications are that the cost of credit will rise and its flow to the private sector may even squeeze further.

That is because, as the rate goes up, the cost of BoG funds to banks and other financial institutions will equally rise, causing them to pass on the extra cost to their consumers by way of increased interest rates.

The Executive Director of AGI, Mr Seth Twum-Akwaboah, said in an interview that the rise in the policy rate was worrying in that it will prevent banks from lowering their rates.

“Generally speaking, the energy crises stressed most businesses in the first quarter of this year and that might have caused most of them not to go in for loans hence the less credit flow.”

“We expected the rates to come down but with the policy rate now going up, it means that the rates won’t even come down in the second quarter and that is a concern to us,” Mr Twum-Akwaboah said.

The non-performing loan (NPL) ratio of banks in the country has, meanwhile, improved from 14.1 per cent last year to 13.3 per cent this year.

Total assets of the banking industry also rose from GH¢23.2 billion recorded in the first four months of last year to GHC29.6 billion this year on the back of a sharp rise in advances, the BoG survey indicated.