The merger between the third and fourth biggest telecom companies in Ghana, Airtel and tiGO is expected to lead to greater industry development, better quality of service through continued investments in the sector, and introduction of more innovative services for customer benefits.

The merger is, however, limited only to the Ghana operations of the two companies whose individual subscriber numbers is below Vodafone.

In what is expected to heighten competition within the already competitive industry where six major multinationals are playing, the CEO for Tigo Ghana, Roshi Motman, said in an exclusive interview in Accra at the weekend that “We believe that the consolidation will lead to greater industry development, better quality of service through continued investments in the sector, and introduction of more innovative services for customer benefits”.

She said: “The combination of the two entities aims to bring together the strengths of both companies to better serve customers in Ghana.”

“In Ghana, in particular, we see the industry structure as very fragmented, and certainly the opportunity is there for consolidation, this transaction is part of that. This transaction is not a sale, but rather the creation of a stronger entity along with Airtel,” Ms Motman was optimistic that the combined entity would serve nearly 10 million customers and be a better challenger to the market leader.

MTN Ghana, the industry leader for more than 20 years, has in excess of 17 million subscribers.

But Ms Motman said: “The current transaction is a step towards building a profitable and sustainable business in Ghana.” 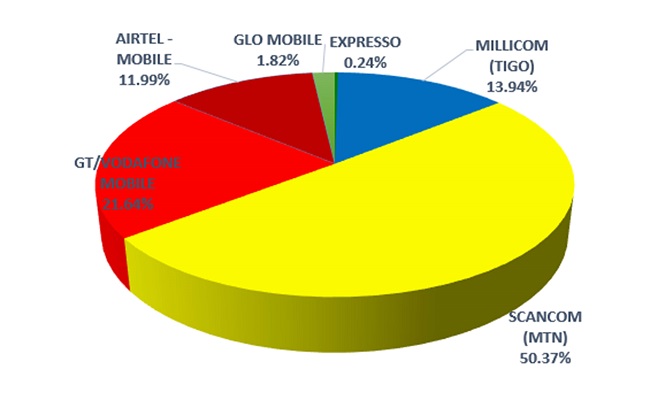 The move by the two companies whose combined force is expected to position them as the number two in terms of market share is, however, subject to regulatory approvals from the National Communications Authority (NCA) acting on behalf of the government.

“Until we receive regulatory approvals - which may take a few months - both operations, Airtel and Tigo will continue to be managed separately and business will carry on as usual,” Ms Motman.

Merger talks had been going on since the end of the last quarter of last year and was amplified in the last weeks of February, news, Graphic Business broke amid denials from Airtel Ghana in particular.

When asked about how long the discussions have been ongoing, Ms Motman said: “These are conversations between shareholders of both entities.”

Meanwhile, final approvals are expected to take several months “but we do not know how much time exactly this could take. We are working hard to get the regulatory approvals at the earliest,” she said.

There will be an integration team dedicated to implement the merger. This would allow Tigo and Airtel teams to continue focusing on their day-to-day activities and not disrupt the business.

Ms Motman said: “Until we get the regulatory approval we cannot disclose further information about implementation of the merger.”

It is still not clear under what brand the two as one will operate after their approval from the regulator.

“The brand strategy of the combined entity is yet to be formulated and would be based upon what is best for the combined operations,” she said.

There are questions about the management split but in clarifying what is to be expected, Ms Motman said the moment the transaction was completed there would be redistribution of management within Ghana with retention of best talent from both companies to drive the combined entity towards profitability.”

She confirmed she would lead the new joint entity.

Meanwhile, she was quick to add that “Until we get regulatory approval, both Airtel and Tigo will continue to operate under the leadership of their current CEOs.”

Such mergers the world over have initially lead to staff layoffs as the new management is often focused on having a lean workforce to reduce operational cost, avoid duplication of duties and improve efficiency and profitability.

Ms Motman said without mincing words: “Once the transaction closes there will be reallocation of resources within both Airtel and Millicom with the objective of rationalisation of operations. We can expect some headcount reduction as we need to ensure key functions are not duplicated. This will be done in accordance with the Ghana Labour law. Until we get regulatory approval, no change will happen. Both Tigo and Airtel would continue to operate as usual. We had a safe durbar and the regional teams called in. There were many questions.”