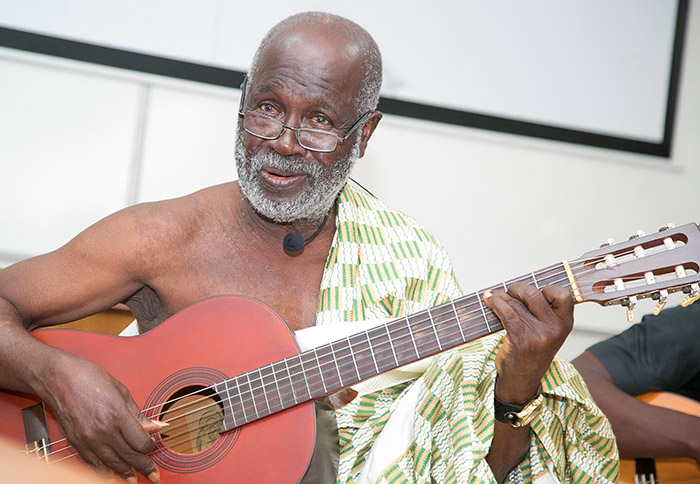 Kwabena Boa-Amponsem, popularly known as Agya Koo Nimo, is a leading folk musician and regarded as one of the living legends as far as highlife music is concerned.

Born in the village of Foase in the Atwima District in the Ashanti Region, he worked in various jobs in science and medical-related fields while maintaining his interest for music.

In 1957, he formed the Ghanaian roots ensemble, Adadam Agofomma, which received huge commendation.

Koo Nimo became the first Ghanaian to have his work put on a compact disk in 1990 when his eight-song album Osabarima was released.

In 1979, in recognition of his services to Ghanaian music as a performer, teacher and administrator, Koo Nimo was elected President of MUSIGA (the Musicians Union of Ghana).

In 1985, he was appointed interim chairman of COSGA, the Copyright Society of Ghana. More recently, he has been made an honorary life member of the International Association for the Study of Popular Music, along with such distinguished names as Professors J. H. K. Nketia and John Collins.

In February 1991, in recognition of his services to music, he received the prestigious Asanteman award from the Asantehene. In March, he received the Flag-star Award from ECRAG (Entertainment Critics and Reviewers Association of Ghana). In 1991, he was invited to serve on the National Folklore Board of Trustees.

In March 1997, the Ghana government celebrated the 40th anniversary of independence by awarding gold medals to 40 of its distinguished citizens, one of whom was Koo Nimo. This was in recognition of his efforts to preserve traditional culture.  The following month, he received the Konkoma Award for his contribution to Ghanaian highlife music.

Agya Koo Nimo’s father was a trumpeter and his mother a member of the Methodist choir.

Appearing on the Springboard, Your virtual University, a radio programme on Joy FM, he said he started his music career right from the day he was born.

“When I cried, that was my first melody,” he stated.

Growing up, he said he used to join some old women in the village who woke up at dawn on weekends to sing songs they described as ‘songs for nation building’.

“At dawn, these old women would do songs for nation building and I would sit in and listen to them,” he stated.

He said he had his first music teacher at the age of five while in a mission house.

“One weekend, Mr D. K. Sam, my music teacher, was sick and he called me to rehearse some hymns for church service on Sunday. I was able to play the organ and after that he made sure I played every Sunday,” he noted.

Agya Koo Nimo, who is noted for playing the guitar, said he started his music career by playing the organ at church.

Agya Ko Nimo shared 10 principles that have shaped his life in the music industry over the years.

1.    Character: fame is a vapour, popularity an accident, riches take wings, only one thing endures and that is character

3.    Family: treasure the gift of family. They are vital pillars for your development.

4.    Respect: respect and celebrate men and women of valour and distinction.

5.    Education: let’s retain storytelling and proverbs in our education, especially for children.

7.    Respect for trees: trees are gifts from God. They take carbon dioxide from us and give us oxygen.

8.    Imitation: let’s avoid wholesale importation of foreign cultures, social practices, thought patterns and the abandonment of our own creative geniuses.

10.  Marriage: appreciate your spouse and the contribution he or she makes to your life.