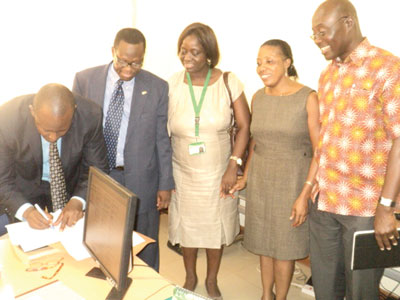 Modern communication and technology equipment has been installed at  the Accra East Environmental Protection Agency (EPA)  office at Tema Community 22 to help improve both internal and external communications of the agency.

Estimated at GH¢469,720, the project was jointly funded by the Agency and the Canadian International Development  agency (CIDA).

Speaking at the inauguration of the project, the Deputy Director General of the EPA, Mr Samuel Anku, disclosed that CIDA sponsored the project with GH¢450,000 while the EPA contributed GH¢19,720.

The communications equipment included servers, scanners and Internet connectivity to link all the regional offices of the EPA to store and retrieve documents for effective work.

Mr Anku observed that the project was in line with the government’s decision to recognise capacity development in the public sector as critical in the implementation of the Ghana Shared Growth Development Agenda.

It was in this regard that the government initiated the Capacity Development Mechanism (CDM) with support from the CIDA, he noted.

Mr Anku observed that the communications system of the agency was characterised by poor delivery of reports, processing of environmental permit applications decisions and feedback of requests, among others.

He said the project, which was undertaken by the National Information Technology Agency (NITA), was piloted in the Accra East, Northern Region and Western Region offices of the EPA.

Mr Anku said NITA had also completed an optic cable connectivity at the head office of the EPA.

He commended NITA for completing the installation work on time for the Accra East office of the agency to start using it.

The Director General of NITA, Mr William Tevie, who was represented by Mr Eric Akumiah, emphasised the importance of the agency.

He said NITA would soon begin a National Data Centre for the EPA to render a more effective service, adding that with the connectivity, the EPA is now automated and connected to GovNet.

The Director of Planning, Programme, Monitoring  and Evaluation (PPME) of the EPA, Mr Ebenezer Appah-Sampong, said the installation of the communication technology equipment would cut down cost and reduce paper use in its operations.

He was of the view that it would also help with the compliance of laws and ensure more collaboration and dealings with the public.

She gave an assurance that the equipment would be used adequately to help grow the EPA.