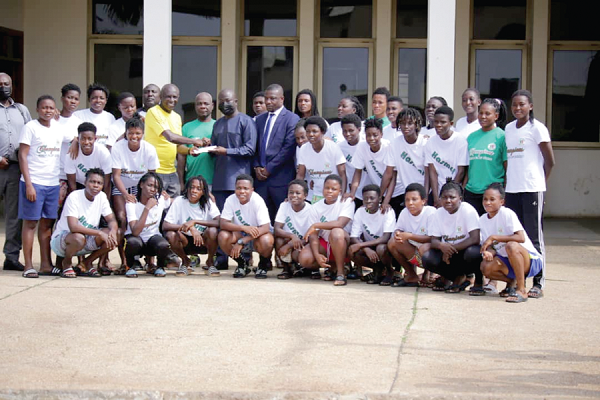 • Tamimu Issah (arrowed), a representative of the Vice-President, donating the cash to Coach Yussif Basigi in the presence of the team Follow @Graphicgh

The Vice President, Dr Mahamudu Bawumia, has donated US$10,000 to Hasaacas Ladies to boost their preparations towards the first ever CAF Women's Champions League.

An aide of the Vice President, Mr Tamimu Issah, presented the cash to the team at their camping base at Prampram yesterday.

The donation, Mr Issah said, was in response to an appeal launched by Hasaacas Ladies to enable them to prepare adequately ahead of their trip to Abidjan to seek qualification for the main tournament to be staged in Cairo in November.

"On behalf of the Vice President, Dr Bawumia, I present this amount of US$10,000 to you. It is his response to the public appeal for support towards your participation in the first ever CAF Women's Champions League," he said.

Mr Issah said Dr Bawumia had followed with interest the exploits of Hasaacas Ladies who won both the league and the FA Cup this season and was moved by their plight.

“Thus, the donation is to show his support and provide the funds required to prepare adequately. His Excellency conveys his special message of goodwill to the entire team and urges you to go all out and make yourselves and the country proud in Cote d'Ivoire," he added.

Last week, the management of the club announced that due to financial constraints, the club would travel to Abidjan by road unless it received support.

The prompt response to their appeal by Dr Bawumia was, therefore, considered timely.

Hasaacas Ladies, double women’s football champions, are set to leave for Abidjan today to round off their preparation for the zonal competition which starts on Saturday.

In the Abidjan tournament, the team will start their historic Women's Champions League journey in the West Africa Football Union (WAFU) Zone B in Cote d'Ivoire this weekend, hoping to pick the sole ticket for the eight-nation tournament in Cairo.

Hasaacas Ladies will play in Group B alongside Nigeria’s River Angels and AS Police from Niger between July 15 and 30.

Receiving the donation on behalf of the team, the Head Coach of Hasaacas Ladies, Yussif Basigi, expressed appreciation to Dr Bawumia for his surprise contribution, which would be of immense help to the club’s campaign.

Skipper Janet Egyiri, on behalf of the playing body, also expressed gratitude to Dr Bawumia and assured him and the nation that they would go all out to make the nation proud.

The President of the club, Nanabayin Eyison, described the Vice President’s gesture as "gargantuan," adding that it was the first response to their public appeal.