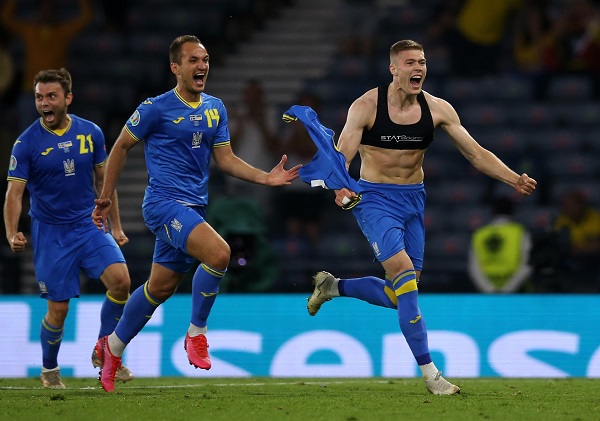 Artem Dovbyk netted in stoppage time at the end of extra time as Ukraine squeezed past 10-man Sweden 2-1 at Hampden Park on Tuesday to claim the last available berth in the European Championship quarter-finals.

The two sides were level at 1-1 after 90 minutes but the tide of the last-16 game changed when Sweden had defender Marcus Danielson sent off for a studs-up, high challenge nine minutes into extra time.

Oleksandr Zinchenko’s left-footed half-volley after 27 minutes gave Ukraine the lead but Emil Forsberg equalised when he hit home a deflected effort from the edge of the penalty area two minutes before halftime.

Ukraine now take on England in Saturday’s quarter-final in Rome.

Ukraine have reached the quarter-finals of a major tournament for only the second time, the previous instance being the 2006 World Cup (eliminated by Italy).

Sweden have been eliminated from all three of their knockout stage matches at the EUROs (also vs Germany in 1992 and Netherlands in 2004).

Ukraine’s Oleksandr Zinchenko became the fifth different Manchester City player to score at EURO 2020 after Kevin De Bruyne, Raheem Sterling, Aymeric Laporte and Ferran Torres -– only Atalanta (also five) have had as many different players score at the tournament.

Andriy Yarmolenko has either scored (two) or assisted (three) five of Ukraine's eight European Championship goals. Indeed, five goal involvements is level with Andriy Shevchenko (4 goals, 1 assist) for the most by a Ukraine player at major tournaments (World Cup & EUROs).

Ukraine coach Andriy Shevchenko and his goalkeeper celebrating their victory

Emil Forsberg has scored four goals at EURO 2020; the only player to score more at a single edition of a major tournament (World Cup & EUROs) for Sweden is Kennet Andersson at the World Cup in 1994 (5).

Sweden’s Marcus Danielson became the fourth player to receive a red card in extra-time of a European Championship match, and first since Nuno Gomes for Portugal against France in 2000.

Sweden v Ukraine was the fourth EURO 2020 last 16 tie to go to extra-time (also Italy v Austria, Croatia v Spain & France v Switzerland), the most ever in a single knockout round in the competition, overtaking the three that went the distance in the 2008 quarter-finals.