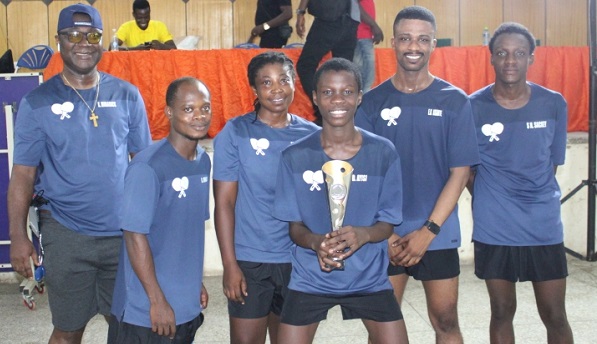 The True Hustler Loopers team in a group photograph with their trophy. Follow @Graphicgh

In a very competitive four-set final at the Apenteng Hall in Koforidua last Saturday, Emmanuel Asante of True Hustler Loopers beat James Marfo of Empress 3-1 in a four set final game. Asante won the first two sets before Marfo fought back and reduced the deficit, but Asante relied on his experience to win a close set 12-10.

An excited Asante told the Daily Graphic after his victory that he hoped to participate in more competitions to enable him qualify to play for the national team in the upcoming Commonwealth Games and 2023 African Games in Ghana.

The Chairman of the NJTTC, Felix Adjetey Sowah, appealed for support from the government and corporate organisation to help expand the table tennis club and the competition to help identify and groom more talents in the region.

"There are many talents in Koforidua and its environs that need to be developed. Some of them come here, but we also used to go to schools and identify some of these talents and train them, but now we are not well equipped for these things. We need the support of the government and sponsorships to help us groom more talents that can win medals for this country," he said.

He announced that the Daasebre Nana Kwaku Boateng II Inter-Community League would start this week.