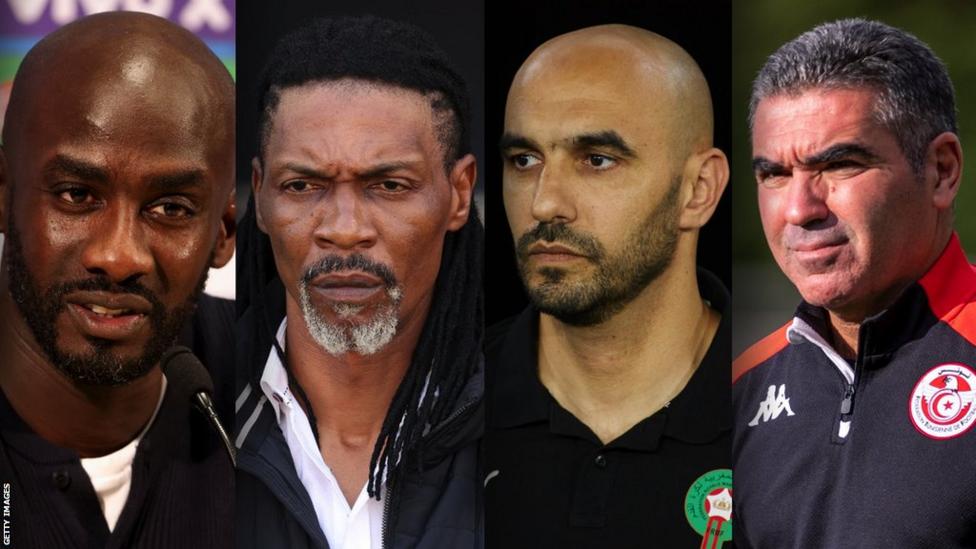 African sides will break new ground at the World Cup this year as all five qualifiers from the continent head to Qatar with home-grown coaches.

Four of those men are taking charge at the finals for the first time, with just Senegal's Aliou Cisse in the dugout in Russia four years ago.

All five African teams were knocked out in the group stage in 2018, so the main task will be to clear the opening hurdle before they can even consider making history in Qatar by passing the last eight.

Here, BBC Sport Africa looks at the major issues facing the quintet as the first ever mid-season World Cup - and the first staged in the Middle East - is about to get under way.

Can any sides break through the quarter-finals?

Africa's qualifiers have a point to prove as, for the first time since 1982, no side from the continent reached the knock-out stages in 2018 - when Morocco, Senegal and Tunisia, who all return, represented Africa alongside Egypt and Nigeria.


Cameroon and Ghana return to the party this year after enduring regrettable 2014 World Cups with an on-field fight and very public bonus row respectively.

Having won their first Africa Cup of Nations in February, Senegal's high hopes have been dramatically checked by the late injury-enforced absence of Ballon d'Or runner-up Sadio Mane, whose penalties claimed both the continental crown and World Cup qualification.

Despite having a coach who took charge only two months ago, Morocco could make life tougher in Group F than Belgium, with their famed generation getting older, 2018 runners-up Croatia and Canada might think.

A desert World Cup and a dust-storm of controversy

Cameroon played with pace and power at times when hosting this year's Nations Cup but the prediction by striker-turned-federation president Samuel Eto'o that the Indomitable Lions, led by Rigobert Song and disappointing in recent friendlies, will beat Morocco in the final stretch the limit.

Just three African teams have reached the World Cup quarter-finals - out of 49 visits - with none coming closer to progressing further than Ghana, whose last-minute penalty miss in extra-time against Uruguay in 2010 will be constantly in mind with the two teams meeting again in Group H.

The aim still remains a first semi-final, but Mane's injury may realistically have put paid to that given his importance to the Teranga Lions, Africa's top-ranked side since November 2018.

Senegal lost both their talisman and main source of goals when Mane, his country's all-time top scorer with 34 strikes, was ruled out of the tournament.

Not since George Weah's victory in 1995 has an African footballer finished in the top two of the Ballon d'Or, which gives an indication of how much the Bayern Munich star will be missed.

Watford forward Ismaila Sarr and Alanyaspor striker Famara Diedhiou, with 10 international goals apiece, are the next highest scorers in the Teranga Lions squad, while the burden may also fall on Salernitana's Boulaye Dia to lead the line.

Cisse was part of Senegal's golden generation which reached the last eight in Japan and South Korea in 2002 and, having taken charge seven years ago, will be drawing on all of his experience to come up with a new game plan at short notice.

The West Africans face the Netherlands in their opening Group A game on Monday, with games against the hosts and Ecuador to follow.

Who will be African star in place of Mane?

Hakim Ziyech has 18 goals in 43 caps for Morocco, having returned from the international wilderness in September.

With Mohammed Salah and Riyad Mahrez also absent, after Egypt and Algeria failed to qualify, the chance is on for others to grab the spotlight.

Ghana midfielder Mohammed Kudus will take some stopping should he continue his sparking Champions League form with Ajax, and Cameroon boast talented forwards in Eric Maxim Choupo-Moting, Karl Toko Ekambi and Vincent Aboubakar, who grabbed eight in seven games at the Nations Cup.

While Tunisians hope midfielder Aissa Laidouni can continue to impress, Hakim Ziyech will aim to deliver after the long-running saga of his exclusion from the Morocco squad, with his goal from inside his own half in a recent friendly proving a stunning return.

A feud with former coach Vahid Halilhodzic saw the Chelsea winger dropped last year and omitted from the Nations Cup squad, with the 29-year-old - who quit international football in February - back in the fold once the Bosnian was dismissed three months ago.

This World Cup was moved from its traditional timing in June and July to avoid the mid-year heat in Qatar, when average afternoon temperatures are about 40 degrees Celsius and the mercury can even tip 50 degrees.

The climate may prove too much for European sides, with November and December usually seeing temperatures of 27-30 degrees and humidity making it feel more like 30 to 35 degrees, although locals talk of unseasonably hot weather in Qatar at present.

Yet temperatures dip in the evenings and the stadia built for the tournament have been designed to maximise shade, with air conditioning also expected to lower on-pitch temperatures to a more manageable 21 degrees.

African sides are used to a range of conditions from qualifiers and tournaments held around the globe's second-largest continent, including intense heat, so can this experience be to their benefit in Qatar?

Qatar hosted the Arab Cup in December last year to serve as a test event for the World Cup, with Tunisia losing to Algeria in the final.

The Carthage Eagles benefited from their large fan base in Qatar during their run, and are expected to have a home-like atmosphere when they return in Group D encounters against Denmark, Australia and defending champions France.

The North Africans need all the help they can get as they aim to reach the knock-out stages for the first time at the sixth attempt.

"We are going to play on a familiar continent, there is a big Tunisian diaspora in Qatar. They showed it at the Arab Cup where the stadiums were packed in Tunisian red, and if it can help us to excel and do more it will be exciting."

The same applies to Morocco too, where the local culture, such as the lifestyle and call to prayer, will be different but familiar.

Is it time for an African coach to shine?

Otto Addo (Ghana), Rigobert Song (Cameroon), Walid Regragui (Morocco) and Jalel Kadri (Tunisia) will all be managing at the World Cup for the first time
For the first time since Africa played with more than one team at the finals, which was 40 years ago in Spain, all its World Cup representatives are led by local coaches.

By far the most experienced is Senegal's Cisse, who took charge in 2015, since all four others were only appointed this year.

The long-running Ziyech saga ended with Walid Regragui replacing Halihodzic as Morocco boss in August and like the rest, he is bidding to become the first African coach to lead an African side to a World Cup quarter-final at least.

After games against Portugal and South Korea, Black Stars coach Addo has the added burden of a rematch of their dramatic 2010 quarter-final when they face Uruguay on 2 December.

After his infamous goalline handball deep into extra-time at Soccer City in Johannesburg 12 years ago, former Liverpool and Barcelona forward Luis Suarez will be a marked man when the two sides meet again.

The incident is one of the most controversial in World Cup history, even if Suarez's gleeful celebrations are a bigger crime for many than his actual 'save'.

Now 35, should he take to the field against the West Africans, then every tackle on him should be worth keeping your eyes on in Africa's stand-out group match.