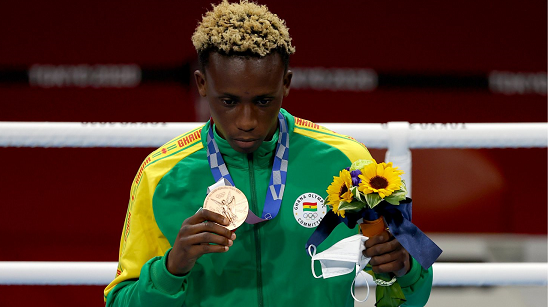 Ghana's sole medallist at the just-ended 2020 Olympic Games, Samuel Takyi, made the country proud as he became the only African athlete to mount the stage, along with other athletes representing other continents, during the closing ceremony of the Tokyo Olympic Games last Sunday.

Takyi put Ghana back on the international sporting map, after nearly three decades of drought, when he won the bronze medal in the Featherweight division of boxing at the Games.

He was also Ghana's flag bearer at the closing ceremony, proudly holding aloft Ghana's flag of red, gold and green.

It was an unforgettable moment for the youngster, who was chosen to represent Africa as the only African boxer to win a medal, as the curtains were lowered on the games last Sunday.

Competing at sports’ biggest global gathering and later sharing that hallowed platform at the Tokyo Olympic Stadium, in the full glare of a global television audience, filled the Bukom native with a great sense of pride.

He declared in a tweet: "Representing our various nations comes with pride as well."

He gave an indication that better days lay ahead of him and for Ghana sports.

"Come 2024 and beyond, it's my belief that we shall have more medals as a country, God willing. Keep pushing us, keep believing in us and help us keep hope alive," he said.

Ghana last won an Olympic medal at the 1992 Olympic Games in Barcelona, where the Black Meteors claimed a bronze medal — Africa's first Olympic medal in football.

Takyi was not born when Ghana last won that Olympic medal, having been born nine years after the Games in Barcelona.

His achievement at the Tokyo Olympics last week, therefore, places him in an exclusive class of Olympic medalists from Ghana, including Clement 'Ike' Quartey, who won a silver medal in the 1960 Games in Rome; Eddie Blay, who won a bronze in the Tokyo 1964 Games, and Prince Amartey, who last won a medal in boxing at the 1972 Games in Munich.

A former President of the Ghana Boxing Authority, Mr Moses Foh-Amoaning, said he believed Takyi's achievement further strengthened calls for the state and corporate bodies to invest heavily in amateur boxing, having proved that it had the best potential to bring glory to Ghana if given more attention.

Mr Foh-Amoaning, who put together the Bukom Fist of Fury, a novel boxing league comprising juvenile, amateur and professional boxers which gave the then 17-year-old Takyi a platform to compete, said the youngster had a lot of promise but needed a well-guided career to ensure he achieved his full potential.

The GOC President and the Secretary-General were sponsored by the IOC.

There were 206 National Olympic Committees participating in the games, including the IOC Refugee Olympic Team, which sent an expanded 29-athlete group to the games after the team debuted at Rio 2016.

Information gathered by the Daily Graphic indicates that Takyi will arrive in the country on Friday.

Meanwhile, the countdown to the next Olympic Games in Paris, France, has begun, with 1,080 days to the start.

The games are a popular, multicultural festival and a celebration to share with the rest of the world.