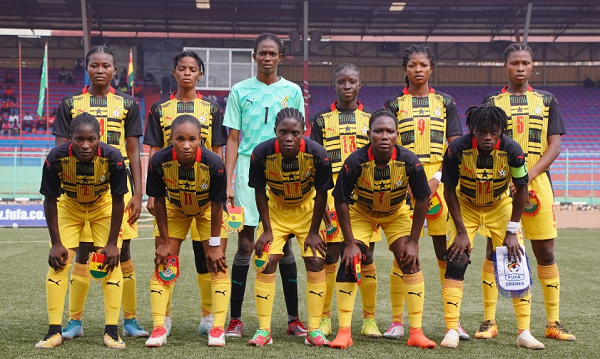 Ghana’s Under-20 female team, the Black Princesses are cautious not to slip in their campaign for a slot to this year’s Women’s World Cup (WWC) after securing an advantage against Uganda in the third round of the qualifying campaign.

Last Saturday, the Princesses beat their Ugandan counterparts, the Young Crested Cranes 2-1 away in Kitende to have a comfortable lead ahead of the second leg

Coming up against the Ugandans who until last Saturday had been a free-scoring side, the Princesses went to Kintende with a cautious approach but goals from Salimatu Abdulai (19th) and Grace Animah (48th) earned them a lead with Fauzia Najjemba scoring a consolation from a penalty on the 83rd minute for the homesters.

The Princesses returned home on Monday (January 24) and head coach Ben Fokuo while satifisfied with the result, insists it was a just a good cushion, and not the final result in the leg.

“We can’t be jubilating or celebrating over the results. We went to Uganda with the plan of getting a good result that would take the pressure off us coming into the second leg. That has been achieved but the celebration ended the moment we stepped out of the dressing room because, there is still an important match ahead,” Coach Fokuo stressed.

“Until we played them, the Ugandans had scored 11 goals in four games and therefore looked a dangerous side. We therefore went into the game with a plan to keep them at bay, thankfully, that worked and we got two goals that put us in the lead.

“They managed to equalize but we worked hard to protect that lead and like I said earlier, we wanted a result that would take the pressure off us going into the second leg. We got that,” Coach Fokuo said in an interview with the Graphic Sports online, after the team arrived home.

He said having accomplished the mission in Kitende, the next agenda would be to win the second leg to progress to the final round of the qualifying campaign and then push for one of the two slots for the competition in Costa Rica from August 10 to August 28.

The team headed straight back to their Prampram Ghanaman Soccer Training Centre base to continue with their preparations for the second leg scheduled for the weekend of February 4 to 6 at the Cape Coast Stadium.

Coach Fokuo indicated that they were not resting on their oars as the Ugandans could still pose a threat with the scoreline.

“Having scored a consolation, Uganda could still pose a threat if they scored a goal in the second leg. We will therefore, leave nothing to chance and will get the job is completed in the second leg so as to keep our mission on course by progressing to the final round of the campaign,” he emphasised.

When the Princesses do advance, they would play the winners of the Tanzania versus Ethiopia encounter.

The first leg of that game played in Zanzibar ended 1-0 in favour of the Tanzanians. Ethiopia also host the second leg on February 4 to 6.

In the other matches for the third round, Morocco were held to a 1-1 draw by Senegal in Rabat. The second leg will be played in Dakar.

Cameroun and Nigeria also played to a goalless draw game in their crunch encounter in Douala, with all to play for in the second leg to be honoured in Lagos.