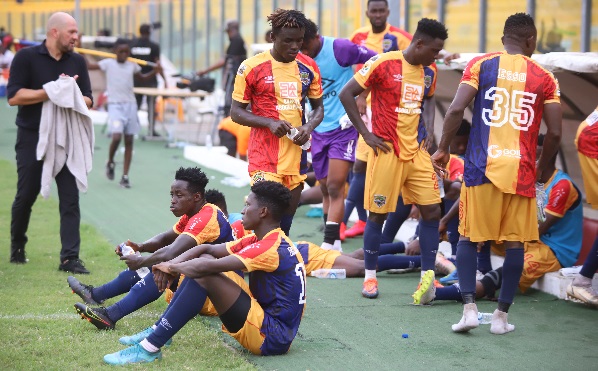 A dejected Hearts of Oak team after the end of the game
30.5k Shares

Hearts of Oak have been eliminated from the MTN FA Cup following a 1-0 defeat to fellow Premier League side Dreams FC in a Round of 32 clash which ended on a controversial note at the Accra Stadium on Sunday.

Hearts had the chance to come back into the game through a penalty kick in additional minutes after striker Kwadwo Obeng Jnr was fouled in the box but goalie Augustine Koomson saved Benjamin Yorke’s effort.

However, referee Rustum Senorgbe called for the penalty to be retaken after Koomson failed to be on his line before Yorke’s kick, a decision which nearly saw Dreams players walk off the match but for the intervention of Coach Karim Zito.

When calm was restored, Samuel Inkoom opted to replace Yorke to take the penalty but Koomson produced another masterclass to stop the kick from entering his net.

Hearts started the game looking for the opener but Enock Asubonteng missed a sitter to deny his side a deserved lead in the third minute.

Striker Kwadwo Obeng Jnr had laid a pass to Asubonteng but the attacker went down in the box under a challenge that was waived off by referee Senorgbe.

Dreams got the opener in the 9th minute after Boateng capitalised on a mistake from Zakari Yakubu to curl in a beautiful shot.

The Phobians decided to fight back but their efforts were met with a strong defence by Dreams. Hearts’ persistent pressure earned them a free kick in a dangerous position in the 26th minute but skipper Ibrahim Salifu saw his efforts miss the target by inches.

Dreams were alert in defence to avoid conceding and managed to hold Hearts to a 1-0 halftime result.

The Phobians came from recess more determined to get the equaliser after Salifu and Amankwa Baafi made an incursion into the area of Dreams but the final delivery from the latter was not well connected by striker Oben Jnr after 52 minutes.

Hearts nearly conceded another goal in the 60th minute when David Van Dijk was presented with a chance to score for Dreams but defender Robert Addo Sowah cleared his lines to deny him.

The hosts continued their search for the equaliser and were awarded a free kick in the 74th minute from 20 metres but Salifu’s kick went wide.

Hearts were at it again moments later when Samuel Inkoom sent in a dangerous cross from a free kick which was well-connected by Salifu but the ball missed the goal by a margin.

The Phobians finally had their chance to score from the spot when Obeng Jnr was fouled in the box in additional minutes. Yorke took the spot kick and missed it after a save from Koomson but the referee asked that the penalty be retaken after the goalie moved from his lines.

The Phobians failed to score their second attempt by Inkoom whose kick was saved by Koomson to hand his side qualification to the next stage of the MTN FA Cup.