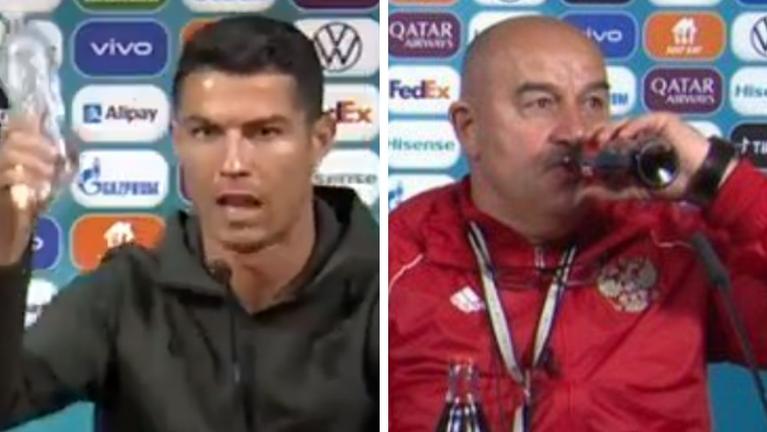 Forget the football — the real fizz of Euro 2020 appears to be occurring off the pitch, thanks to Cristiano Ronaldo.

Ahead of Portugal’s tournament opener against Hungary, Ronaldo decided a pair of glass Coca-Cola bottles didn’t belong on the table in front of him during a press conference.

After removing the beverages and placing them out of sight, the 36-year-old produced a bottle of water, holding it up and saying: “Drink water.”

Coca-Cola issued a statement in response to Ronaldo’s antics, saying “everyone is entitled to their drink preferences” and everyone has different “tastes and needs”.

But Russian football manager Stanislav Cherchesov was not moved by the former Manchester United forward’s actions.

Facing the media following his side’s 1-0 win over Finland in Saint Petersburg, the former goalkeeper casually enjoyed a bottle of the hugely-popular drink.

Cherchesov picked up one that had been placed next to his microphone, opened it and took several sips as he toasted midfielder Aleksei Miranchuk’s matchwinner.

Russia reignited their Group B campaign after Miranchuk produced a glorious finish in first-half stoppage time of Wednesday’s game against Finland.

On Tuesday, devout Muslim Paul Pogba removed a bottle of Heineken during his press conference following France’s 1-0 win against Germany.

Meanwhile, Italy’s Manuel Locatelli also moved his Coca-Cola bottles after netting a double in the 3-0 win over Switzerland on Wednesday.

Ronaldo has been accused of hypocrisy after footage and photos emerged of his involvement in old Coca-Cola commercials.

Ahead of the 2006 FIFA World Cup, Ronaldo featured in an advertising campaign endorsing the drink company.

Former teammate Ryan Giggs revealed Ronaldo once arrived at Manchester United training with a Coke bottle in hand, and subsequently copped a spray from the midfielder.

Last year, the five-time Ballon d’Or winner revealed his son sometimes “drinks coke and eats crisps”, much to his irritation.