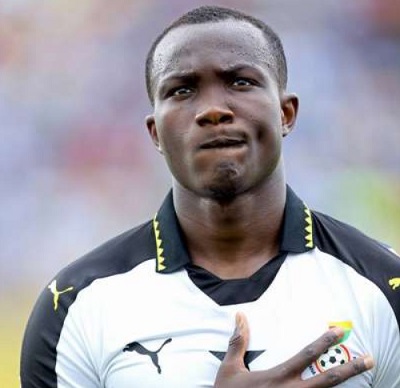 Ghanaian forward Raphael Dwamena has been removed from the playing body of Danish club Vejle Boldklub and placed under medical supervision over concerns arising from heart surgery earlier this year.

According to a club statement, Dwamena, 25, will no longer participate in on-field activities while the club assists him to overcome the setback.

Dwamena joined Vejle on a free transfer from Spanish La Liga side Levante in August after the club's promotion to the Danish topflight only months after undergoing successful heart surgery to have an Implantable cardioverter-defibrillator (a device implantable inside the body, able to perform cardioversion, defibrillation, and pacing of the heart) installed.

"This has been continuously monitored by Vejle Boldklub's health staff and medical team throughout the start-up, on the training ground and during the club's matches," the club statement said.

"There has now been a single case where Raphael Dwamena's limit values ​​when monitoring the heart have been too high, and this unfortunately also means that Vejle Boldklub must now take Dwamena off the field".

Dwamena said he understood the decision and was grateful for the opportunity given him to restart his career in Denmark after an extended lay-off.

He said despite not being able to participate in games, he will still help the club to achieve its goals.

"I am truly grateful for the opportunity that Vejle Boldklub gave me to play football again. Now I have been taken off the field and am under medical supervision.

"Despite not being able to be on the pitch, I still want to help the club achieve its goals. Therefore, I would also like to say to both my teammates, the staff and the fans that I am proud to be part of the Vejle Boldklub family".

The Technical manager at Vejle Boldklub, Jacob Krüger, praised Dwamena for his positive attitude during his short time at the club and vowed that the club will assist the Ghanaian.

"That there has now been one case where the limit values ​​have been too high, we must, based on a health professional assessment as a club, take the consequence of. Raphael is therefore taken off the field. We are, of course, sorry on Raphael's behalf, but the parties have been aware from the outset of the consequence that would have been the case if Raphael's monitoring had exceeded the limit values ​​in the measurement".

Concerns over Dwamena's heart were first reported in 2017 after his £10 million transfer from FC Zurich to Brighton and Hove Albion collapsed over a failed medical.

At the time, FC Zurich maintained that his condition was "neither harmful to health nor compromising the performance of a top athlete".

He moved to Levante one year later and was sent on-loan to Real Zaragoza in October 2019. While on-loan at the club in October 2019, Zaragoza announced that he had a "health problem" which prevents him from engaging in sports.

Dwamena underwent surgery on the condition and returned to training with his Zaragoza teammates in May 2020 after seven months without football.