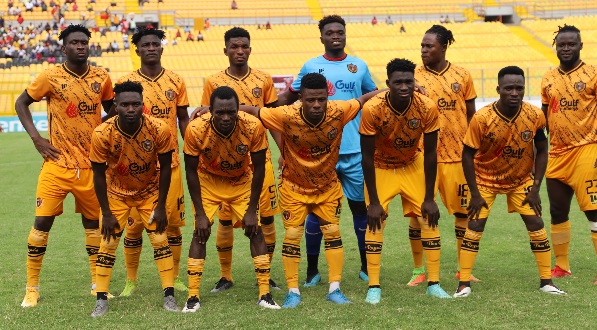 A line up of the Legon Cities squad Follow @Graphicgh

RUNAWAY Ghana Premier League leaders, Asante Kotoko, were humbled 3-1 by Legon Cities in front of their home fans at the Baba Yara Stadium in Kumasi yesterday for their second home defeat of the season after losing to city rivals, King Faisal in the first round of the season.

Sunday’s result was the second straight defeat suffered by the Porcupine Warriors who appeared comatosed by a 1-2 hammering they suffered at the hands of Real Tamale United at the Aliu Mahama Stadium in Tamale the previous week.

Coach Prosper Narteh Ogum’s side maintain an eight-point advantage over second-placed Bechem United who could narrow the lead with a home win over Karela United this afternoon.

Led by former Kotoko coach Maxwell Konadu, the visitors stunned pre-match favourites with a two 2-0 lead before the half-hour mark, with Michael Otou putting his side ahead before forward Hans Kwofie netted twice to deliver a famous win for Legon Cities.

Kotoko's substitute, Salifu Mudasiru scored from a goalmouth melee to reduce the deficit to 2-1 in the 43rd minute and give Kotoko hopes of recovery in the second half. However, before the home side could settle down in the second half, Kwofie made them to pay the penalty when he scored his second goal to put the game almost beyond recovery.

Coach Ogum made two changes to the squad that lost to RTU and handed starting roles to Dickson Afoakwa and Andrew Appau in a bid to get back to winning ways. However, the visitors shot ahead in the 17th minute from a spot kick after a shot by dreadlocks star Michael Ampadu nearly caught goalkeeper Ibrahim Danlad wrong-footed.

Legon Cities Captain Jonathan Attuquaye, was brought down by defender Christopher Nettey in the 12th minute while in a good position to score after racing with the ball outside the penalty box.

The penalty was contested for five minutes by the angry Kotoko players but Referee Selorm Yao Bless stood his ground to allow for Otou to score.

Kotoko, backed by the ever present, drum-beating and foot-stomping students from the Kwame Nkrumah University of Science and Technology (KNUST) responded to the challenge almost immediately but it yielded little results.

Rather, it was ace striker Kwofie who should have added another goal for Cities but he was indecisive in front of goal. But barely a minute after that failed attempt, he atoned for his earlier missed opportunity to connect a fast counterattack to make it 2-0 in the 28th minute.

With just two minutes to end the first half, substitute Salifu Mudasiru, who came on for Dickson Afoakwa minutes earlier reduced the tally for Kotoko in a goal mouth scramble.

The joy of the home fans was short-lived as Kwofie dived to head home his personal second and the third for City.

Nothing appeared to be working for Coach Nartey, especially in the second half, as City's Coach Maxwell Konadu strategy completely eclipsed lead strikers Frank Etouga and George Mfegue.

Brazilian international, Fabio Gama, who so much was expected from, lost his rhythm and ran out of steam before he was substituted in the later stages of the match.