Accra Hearts of Oak’s new-found stalwart, Konadu Yiadom, won the hearts of the club’s followers after scoring a late goal which saved his side from another embarrassing defeat to city rivals, Accra Great Olympics in the betPawa Premier League at the Accra Sports Stadium yesterday.

His 88th minute piercing header secured a vital point for the Phobians who conceded an early goal and were just minutes away from suffering a third straight loss at the hands of their rivals.

Hearts, who suffered an opening week loss to Aduana Stars, went down as early as the seventh minute when Yusif Abdul Razak shot the Wonder Club into the lead. However, the vociferous supporters rallied behind their side late into the game as Coach Samuel Boadu’s players fought like wounded lions to ensure that they split the points with Olympics.

With substitute Denis Nkrumah Korsah, Daniel Afriyie Barnieh and Junior Kaba failing to connect numerous goal scoring opportunities that came Hearts’ way, Yiadom became the unlikely hero yesterday as the tall defender joined the attack during a corner-kick and connected the ball with a header that hit the back of the net before Olympics goalkeeper Benjamin Asare could react.

With former Black Stars players, Emmanuel Agyemang-Badu and Samuel Inkoom, playing against each other for Olympics and Hearts, respectively, there was a lot at stake in the Mantse Derby, especially with the Wonder Club aiming at a rare hat-trick win over their local rivals. 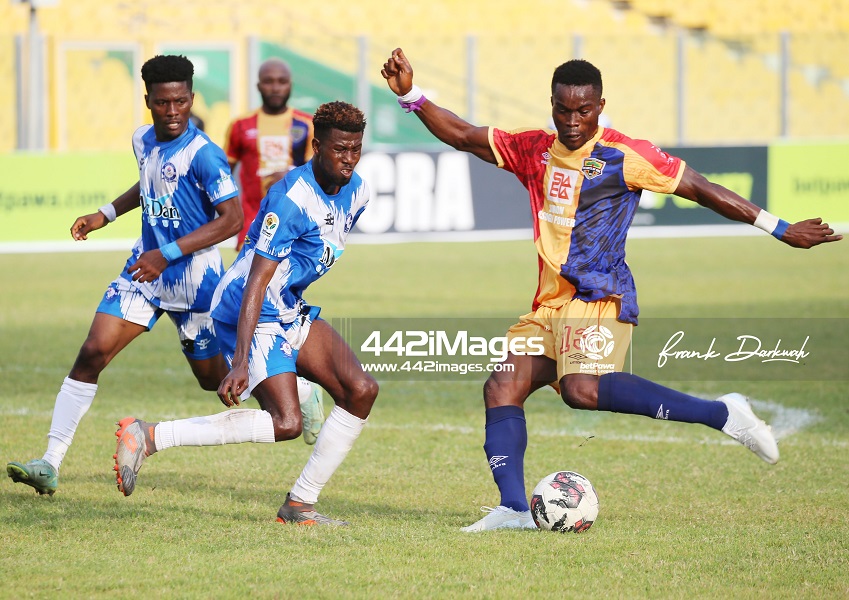 Hearts started the match in a businesslike fashion as they pushed more men into attack for an early goal to unsettle their opponents. They came close to scoring as early as the second minute when Yassan Ouatching was offered a fine chance to put the Phobians into the lead but he squandered the opportunity.

Olympics continued to soak up attack after attack and responded with quick counter-attacks which forced the Hearts defenders to fall back to keep the Olympics attackers in check. In one of their attacks in the seventh minute, a defender of Hearts pushed the ball back to goalkeeper Erick Ofori Antwi who fumbled with his clearance and allowed Razak, who was hovering around the Hearts goal area, to pounce on the ball to break the deadlock.

Hearts accepted the challenge and started attacking from the flanks with Gladson Awako, Barnieh, and Eric Esso combining in attack but found the Olympics defenders unyielding.

In the 42nd minute, disaster hit Hearts when Yassan got injured and was replaced by Suraj Seidu who started harassing the Olympics defenders but failed to make any meaningful impact .

The second half saw the two teams bringing in fresh players as Olympics resorted to building strong defence and relying on counter-attacks with Hearts pushing more men into attack and exploiting openings in the Olympics defence.