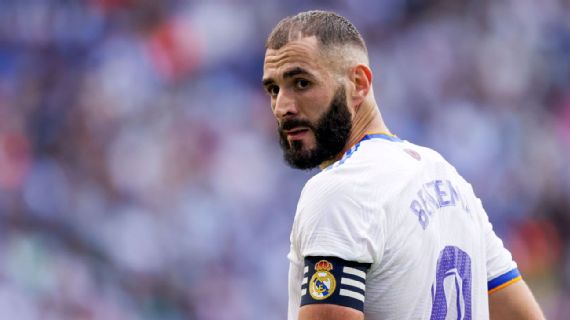 Karim Benzema has been handed a one-year suspended prison sentence and a €75,000 fine for his involvement in the attempted blackmail of former teammate Mathieu Valbuena over a sex tape. Benzema's lawyer told journalists on Wednesday the player will appeal the verdict.

The judgment from a court in Versailles, France -- which found Benzema guilty of "complicity" in the case -- brings an end to a legal saga dating back to 2015 that saw Benzema exiled from the France national team for almost six years. Benzema did not attend the three-day trial last month. His lawyer cited professional reasons, with the 33-year-old in training with Real Madrid ahead of their El Clasico clash with Barcelona.

Four other men -- Axel Angot, Mustapha Zouaoui, Younes Houass and Karim Zenati -- were also found guilty, receiving prison sentences ranging from a conditional 18 months to an obligatory two and a half years.

The case involved a sexually explicit video that prosecutors said Angot discovered on Valbuena's phone after he had been asked to transfer its contents to a new device. Angot and a third defendant, Zouaoui, tried to use the video to extort money from Valbuena, who was then playing for Lyon and France. They enlisted another defendant, Houass, before eventually turning to Zenati, a childhood friend of Benzema's, who prosecutors said recruited the forward as a "middleman." Valbuena contacted the police, who began a sting operation.

Benzema spoke to Valbuena about the video at a France training camp in October 2015. Benzema denied any wrongdoing, saying he was trying to help resolve the situation and warning his teammate to "be careful," describing the blackmailers as "serious criminals."

However, police, prosecutors and the court interpreted Benzema's offer of assistance as abetting the blackmail scheme.

Benzema returned to the France national team earlier this year, playing at Euro 2020 and starring in their UEFA Nations League final win. He is the top scorer in LaLiga so far this season with 10 goals.

Valbuena -- now at Olympiakos in Greece -- has not played for his country since the incident occurred.