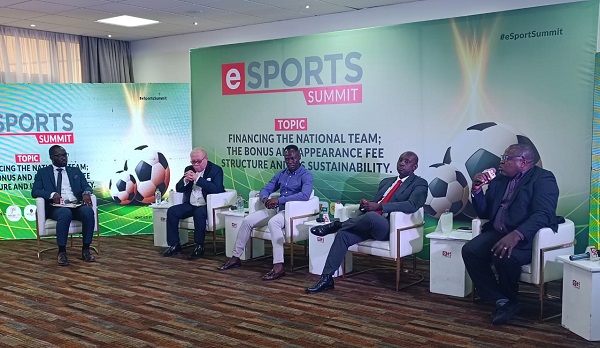 Panellists at a summit to deliberate on the bonus and appearance fee structure of the Black Stars have urged the Ghana Football Association (GFA) and the Ministry of Youth and Sports (MOYS) to swiftly implement the recommendations in the government's white paper on the 2014 World Cup in order to avoid a repeat of the fiasco in Brazil.

The panellists included former Vice President of the Ghana Football Association (GFA), Fred Pappoe; lawyer and member of the Justice Dzamefe Commission of Inquiry, Moses Foh-Amoaning, and a former Managing Director of Hearts of Oak, Neil Armstrong-Mortagbe, also advocated for engagements with the playing body of the Black Stars on a performance-based bonus structure before the 2022 FIFA World Cup in Qatar.

The eSports Summit was on the topic: Financing the national team: The Bonus and appearance fee structure and its sustainability.

What the White Paper said

The government in the White Paper on the Report of the Commission of Inquiry into matters relating to the Participation of the Black Stars in the World Cup Tournament in Brazil 2014, directed that the appearance fee payable to each player should be 1.25% of the appearance fee paid by FIFA.

"This should be the maximum amount allocated for each player of the 23 players. Out of this amount, the negotiated amount to be paid to each player should not exceed 60%".

Bonuses should be an incentive

He argued against the payment of appearance fees in situations where the state was not gaining any financial rewards or rewards less than the sums being paid by FIFA for participating in international tournament.

Mr Pappoe, however, stressed that bonuses must be used by the management of the national team as an incentive for improved performances, adding that appearance fees must also be tweaked to be linked to performances.

"It should be performance-based, I do not subscribe to a blanket payment that once you appear at the World Cup you get $100,000, even if you eliminated after the third match, up till now we are still reeling as a nation after the events at the 2014 World Cup in Brazil" he said.

Mr Foh-Amoaning also called for stakeholder engagements between the Sports Ministry, the GFA and the Black Stars before the 2022 FIFA World Cup.

He also advocated for a separate management agreement between the GFA and the management of the national team to ensure that their bonuses were not linked.

Mr Foh-Amoaning also urged the Sports Ministry to ensure that the recommendations that were accepted by the government were implemented.

Mr Mortagbe said there was no contention as to whether the Black Stars deserved bonuses but advocated for a sustainable funding structure.

He said the Black Stars was a cash cow that could be used to secure funding for other national sports teams if corporate bodies were encouraged by the government to invest in the team.

Ghanaian international Emmanuel Agyemang-Badu said he was troubled by accusations that players of the national team demanded appearance fees and bonuses because they were not committed to the national cause.

He further disclosed that he had treated all his injuries at his own cost and as a result, he felt deserving of appearance fees and bonuses.

Mr Badu also advised the management team of the Black Stars to agree on bonuses and appearance fees with the playing body before the 2022 FIFA World Cup.

The Head of Policy Coordination at the MOYS, Alhaji M. Saani Adams said the Ministry was reviewing a National Sports Policy that will among others regulate sporting activities including the payment of appearance fees and bonuses.

He said the Policy would also look at ways to make payments sustainable from a national sports fund.