The International Cricket Council (ICC) T20 World Cup trophy touched down in Accra last night at the Kotoka International Airport to begin a historic two-day tour of the country.

Also present were top officials of the GCA and the media.

During its stay in the country, the ICC T20 World Cup Trophy would visit the Parliament House of Ghana, Ga Mantse’s Palace, the Black Star Square, and the Residence of the Australian High Commissioner in Ghana.

It would also make a stop at the Achimota School and the Presbyterian Boys Senior High School where the students and the public would have the opportunity to take some photos with the iconic trophy before departing on Saturday evening.

The trophy has already visited over 30 locations in 12 countries across four continents. 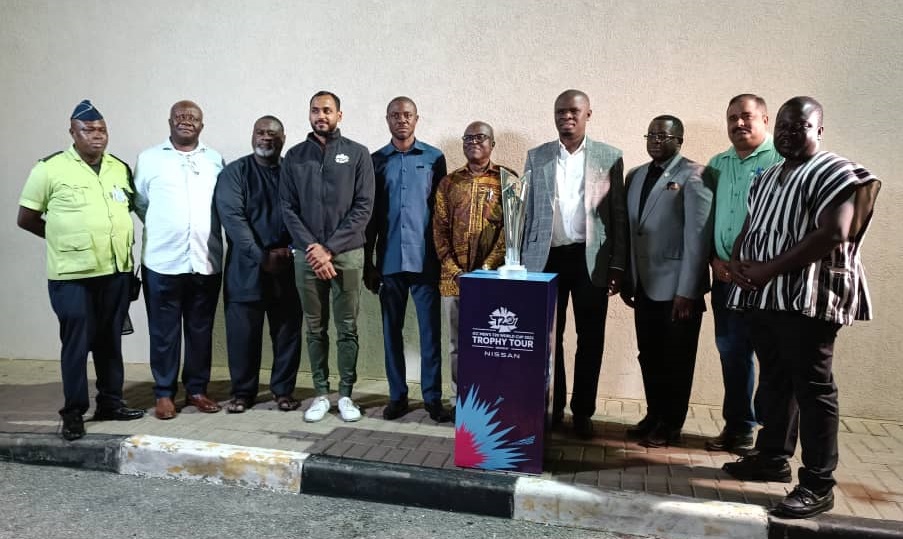 Welcoming the ICC delegation on behalf of President Akufo-Addo to the country, Mr Ussif said he was hopeful that the presence of the trophy would contribute to the development of the sport across the 16 regions of the country.

He explained that if the sport was developed at the regional level, Ghana would produce talented players that can win the ICC World Cup in the next decade.

Mr Ussif added that the tour would be used to promote the sport and motivate national team players and students to take up the sport ahead of the 2023 African Games which would be hosted by Ghana.

On his part, the GOC President expressed gratitude to the Minister for his visible support to the lesser-known sports disciplines. For him, the presence of the trophy in Ghana was proof of the ICC's commitment to the development of the sport in Ghana.

He urged the Minister to help shift the elitist perceptions surrounding the sport, explaining that in Ghana the sport was played by people from less-privileged backgrounds.

The GCA President said the trophy marked a new dawn for the sport in the country as his outfit would leverage on its presence to shore up the development of the game across Ghana. He also called for more collaboration between the GCA and the Ghanaian media after the tour.

The ICC Marketing and Promotions Manager, Shomeresh Shetty said he was grateful for the welcome and looking forward to talks with the GCA about the development of the sport in Ghana.