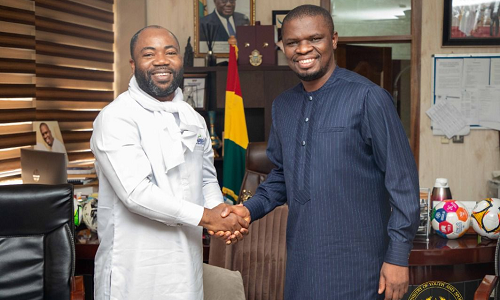 The newly-elected President of African Paralympic Committee, Mr Samson Deen has paid a courtesy call on the Minister for Youth and Sports, Mustapha Ussif to discuss with him ways to promote Paralympic sports in the country.

Mr Deen also used the opportunity to express his gratitude to the Sports Minister for the support he gave him towards his aspiration to become the President of the Paralympic Committee on the continent.

The Sports Minister, Mr Ussif congratulated the newly Paralympic President on his victory, saying that it was President Akufo-Addo’s vision to promote all least-financed sports in the country.

"I can assure you, His Excellency Nana Addo Dankwa Akufo-Addo, President of the Republic is committed to seeing the least-financed sports grow and achieve laurels in Ghana, all geared towards the total promotion and development of sports,” he said.

With him for the courtesy call included the Deputy Minister of Youth and Sports, Mr Evans Opoku Bobie who led the delegation to Rabat, Morocco to ensure Mr Deen’s victory.

Others were the Chief Director of the Ministry of Youth and Sports, Alhaji Hafiz Adam, Director General of the National Sports Authority, Professor Peter Twumasi, Deputy Director (Technical), Mr Kwame Amponfi Jnr and some executive members of the Ghana National Paralympic Committee.

Meanwhile, Talent Hour for Persons with Disability, a not-for-profit foundation with focus on disabled sports, has also congratulated the newly-elected President of African Paralympic Committee on his victory, assuring him of the support of the foundation.

The Founder of the Talent Hour for Persons with Disability, Mr Obeng Ansah, said when properly developed, Paralympic sports could offer a great platform to people with disability to realise their goals in life.

He said it was about time Ghana invested heavily in the Paralympic sports to promote the growth and development of the sports in the country.

For him, the court case was affecting the development of amputee sports in the country and needed to be resolved urgently.

He said he was hopeful that all the parties involved in the case would resolve the issue amicably in order to allow for the growth and development of Paralympic sports in Ghana.