Gold Fields PGA Champs tees off with GHC 160,000 up for grabs 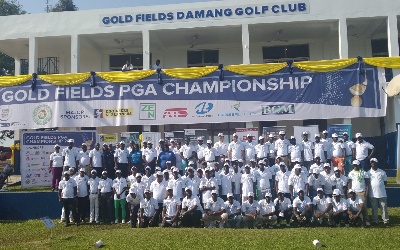 The organisers of the sixth edition of the Gold Fields Professional Golfers Association (PGA) Golf Championship have announced that a GHC 160,000 cash prize will be split among the top 30 golfers at the end of the four-day competition.

Addressing the press after the tee-off of the Championship on Wednesday at the Damang Golf Course in Tarkwa, the Organising Committee Chairman of the Championship, Mr Hans De Beer explained that the winner will walk home with a GHC 40,000 cash prize.
Mr De Beer assured that the golfers we're in for a tough-test on a much-improved golf course while the winner will get a GHC 10,000 cash prize.
He said he was hopeful that the golf course will prepare the golfers to participate in international competitions.
Competition
Among the 80 golfers to tee-off were defending champion Kojo Barnni who is gunning for a third consecutive championship.
However, he will face a stern challenge from two-time winner Vincent Torgah and another former champion, Emos Korblah.
Barnni told this paper that he was poised to become the first golfer to win the Championship three times.
"I want a win, I don't care who is out here today and I hope I would defend my title,  " a confident Barnni said.
Meanwhile, the organisers have announced that the Asantehene Otumfuo Osei Tutu II is expected to be involved in the amateur contest on Friday and Saturday, when the competition ends.