Real Tamale United (RTU) survived relegation by coming from behind to thrash lacklustre Accra Hearts of Oak 4-1 at the Accra Stadium on Sunday.

The defeat makes it four losses in succession for the Phobians and drops them to sixth on the ladder, while RTU escaped relegation by placing 15th on the league log with 41 points from 34 matches.

It was Hearts which fetched the opener in the ninth minute through attacker Suraj Seidu but the visitors equalised eight minutes later before scoring three more goals, with Ronald Frimpong becoming their hero with a brace.

The visitors began by besieging the area of their opponents but the Hearts defence repelled their attack.

In the ninth minute Hearts took the lead to give a false impression that they were going to run over their opponents.. A cross was played into RTU’s area, and as defender Yussif Mohammed Nurudeen attempted to clear it, he missed his balance which saw an advancing Seidu capitalise to slot it into the back of the net.

Unperturbed by the goal, RTU continued their onslaught for an equaliser, knowing that a defeat will exclude them from next season’s Ghana Premier League.

Their charge into the Hearts area paid off in the 17th minute when defensive midfielder, Baba Kushibo’s, curling cross met the head of attacker Ronald Frimpong who directed it into the back of the net.

In the 28th minute, Hearts goalkeeper Richmond Ayi brought down striker Issa Kuka in the box for a penalty. 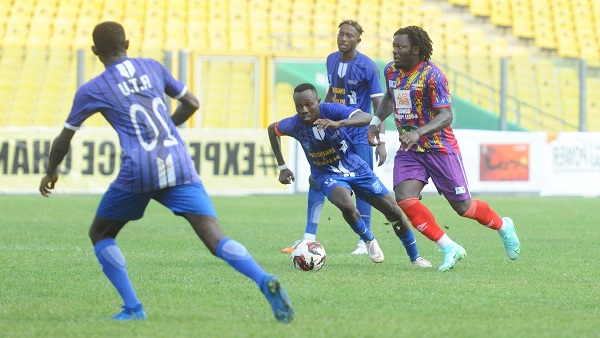 Eight minutes later, RTU increased their tally when Issa Kuka managed to hold on to the ball against two hearts defenders and passed it to Ronald Frimpong who slotted it into the far right corner of the net.

With a two-goal deficit, Hearts introduced Gladson Awako, William Dankyi and Kofi Kordzi to bolster their attack but the trio made no impact on the game and allowed the visitors to continue surging forward for more goals.

Their effort yielded results as they got the fourth in the 75th minute when substitute Listowell Amankona received a pass on the left, controlled beautifully and with a solo run, he entered the box and unleashed a powerful shot which deflected off Hearts’s skipper, Mohammed Alhassan, into the back of the net.

Hearts appeared fragile afterwards with no interest to attack until referee Joseph Kwofie blew his whistle to end proceedings.