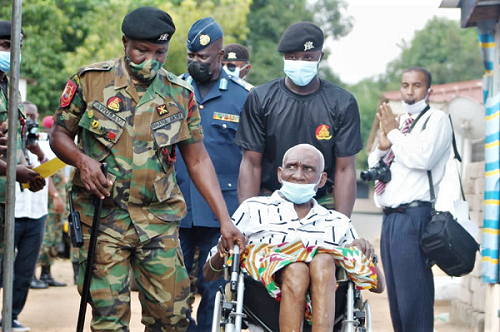 Prince Amartey could not hide his emotions when essential support finally came last Thursday, as the Ghana Armed Forces commissioned and handed over to him a shop stocked with essential provisions to support the sustenance and wellbeing of the boxing legend who has been reduced to a destitute.

Looking frail and consigned to a wheelchair, the hero of Ghana’s 1972 Olympics campaign in Munich was given deserved honour in the presence of the military high command, family members and the boxing fraternity during the hour-long ceremony at the 66 Artillery Regiment in Ho.

Even though Amartey resigned from the Armed Forces as a Lance Corporal in 1974, high ranking military officers led by the Chief of  the Defence Staff (CDS), Vice Admiral Seth Amoama, gave him a standing ovation and eulogised the 77-year-old as a national hero in his own right who deserved to be honoured for his services rendered to Ghana and the Armed Forces.

The commissioning of the shop was in fulfilment of a pledge by the Armed Forces following a petition to the CDS by the boxer’s family and benefactor, Maj. Amarkai Amarteifio (retd), to help rehabilitate the man who won bronze at the Munich Games but has fallen on hard times coupled with health challenges.

Since his exploits in Munich it took Ghana 49 years before the nation won another Olympic medal in boxing. And last Thursday’s ceremony was historic in many ways as young boxer Samuel Takyi was decorated with a bronze medal at the Tokyo Games, ending the country’s five-decade search for another boxing hero at the Olympics.

Vice Admiral Amoama, who flew to Ho with top military officers purposely for the event, said that even though Amartey did not serve the mandatory 18 years in the Armed Forces to benefit from a pension, the institution deemed it a sense of responsibility to support the man who was once a “boxer par excellence and has paid his dues to Ghana and the Armed Forces”.

Maj. Amarteifio, who is the Board chairman of the Services Integrity Savings and Loans Limited (the banking outfit of the military), and was in charge of boxing in the Armed Forces when Amartey first represented Ghana in Munich, expressed his delight that the CDS did not hesitate to offer assistance after he led Amartey’s daughter to make an appeal for support when the former boxer’s plight was brought to his attention in the media.

Later, Amartey told the Daily Graphic that he felt a sense of fulfilment at the honour done him by the military high command at a time that Ghana had ended a 49-year Olympic boxing medal drought.

“I am very happy that I have been honoured at last after serving the army and Ghana. Today, I will sleep well because I know I have not been forgotten,” the two-time Olympian (he also participated in the 1968 Games in Mexico) told the Daily Graphic in a slurred voice.