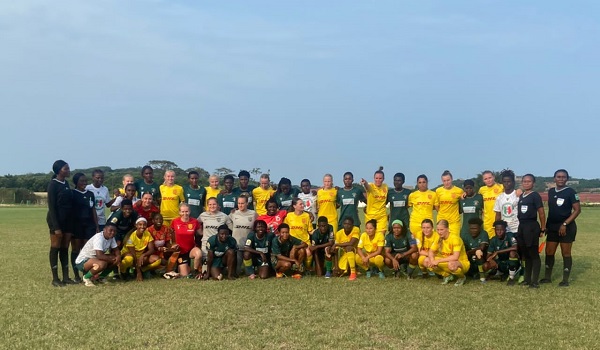 The Technical Director of Right to Dream (RTD) Academy, Mas-Ud Didi Dramani, says his outfit's investment in women's football is its contribution towards the Ghana Football Association's broader view of football in the country.

"We're thinking about how the female football industry is supposed to be. That is also our contribution towards the Football Association's broader view of football in Ghana," he told GraphicOnline in reaction to the pre-season tour of Ghana by FC Nordsjælland's female team.
The 26-member contingent made up of players and officials of FC Nordsjælland pitched camp at the RTD Academy in Old Akrade on arrival in the country on July 18. They are scheduled to return to Denmark on Wednesday, July 27, to finalise preparations for the
Danish Women's League which kicks off on August 4.
The week-long tour saw the Danish side drawing 2-2 with Hasaacas Ladies in a specially-arranged friendly at the Paa Kwesi Nduom Stadium last Saturday.
According to Coach Dramani, the match was strategically organised in Elmina to give the players a feel of the other part of of the country outside their comfort zone.
"However, they wanted to do a deep-end journey which was to take people away from their comfort zone to an environment where they never expected that kind of life," he explained.
"We hosted the team in Old Akrade because we wanted to make them feel that we've also built a part of Europe in Ghana.
"The kind of facilities and everything at the Right to Dream Academy is just like Europe so they never missed anything in Europe," he noted.
As part of their familiarisation programme, the team visited the Kakum Park, Cape Coast Castle and Elmina Castle after Saturday's match to have a view of the other side of the country.
"They (FC Nordsjælland) have really experienced a lot of Ghanaian hospitality," Coach Dramani said.
"They are our sister club where we feed them with our potentials. They are our first option when it comes to talents so we are the same people in different locations.
"We have a Ghanaian player called Princess Boafo in the Danish team. She is the first female player we transferred to the team in 2021," he revealed.
He seized the opportunity to commend the entire RTD staff, led by the Managing Director, Mr Eddie Mensah, for playing a huge role to host the European team.