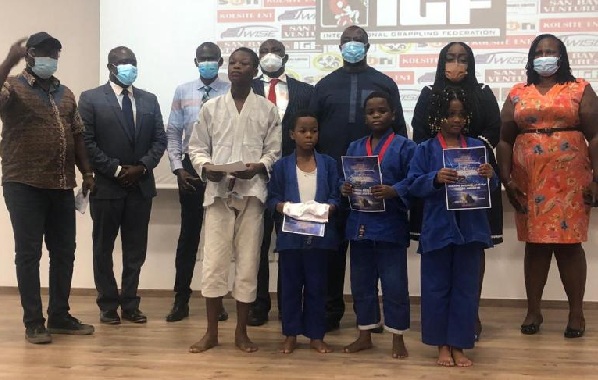 Export and Import Bank Ghana (EXIM Bank) has supported the Ghana Jiu Jitsu Federation (GJJF) with GH¢20,000 to help the association in its activities.

Mr Lawrence Agyinsam, the Chief Executive Officer of EXIM Bank, called for more support for the least-financed sporting disciplines in the country, especially where they had proved to be more successful in international competitions than the highly financed disciplines.

Mr Agyinsam made the call last Wednesday when his company hosted a number of athletes of the PROCSAG who presented some medals and certificates won at an international virtual jiu jitsu tournament in May.

Three boys - Zoe Amoonu Bernie-Johnson,  Aaron Bentwum Bernie-Johnson, Leon Afrim Bernie-Johnson, all students of Hope of Glory Montessori School at Mamprobi in Accra - and a girl, Maame Akosua Amina Nhyira Aboagye, a pupil of Day Spring Montessori International School at Dansoman in Accra, engaged in a few demonstrations of the art of grappling which neither involved kicking nor knocking an opponent but largely a self-defence sport, much to the admiration of Mr Agyinsam.

“When I was approached about this a week ago, I was thinking we were going to see relatively old men or women but I’ve been highly impressed with what we just witnessed these very young people demonstrate.

“I’m especially excited with the girl’s participation because it could pretty much help, they could fight with armed robbers and predators considering the kind of abuse from men today,” Mr Agyinsam noted.

“This certainly is a sport we must encourage and support because first, it is a form of self-defence and secondly, to make sure that they go out there and shine on the world stage. We will donate a cash of GH¢20,000 to serve as an example for other corporate bodies to also come on board,” he added.

For her part, Shakiratu Larteef, the president of Ghana Combat Jiu Jutsu, expressed gratitude to EXIM Bank for its vote of confidence in the association which motivated them to come to the aid of the sport and pledged that the athletes and officials would work harder to make the sport even more popular in Ghana.

“We thank Exim Bank so much for this support and absolute show of faith in what we are doing; we hope this is the beginning of a very healthy and long lasting relationship.

“This definitely is the motivation we need from Corporate Ghana and I can assure you we will nurture more athletes and achieve much more internationally going forward,” Ms Larteef said.