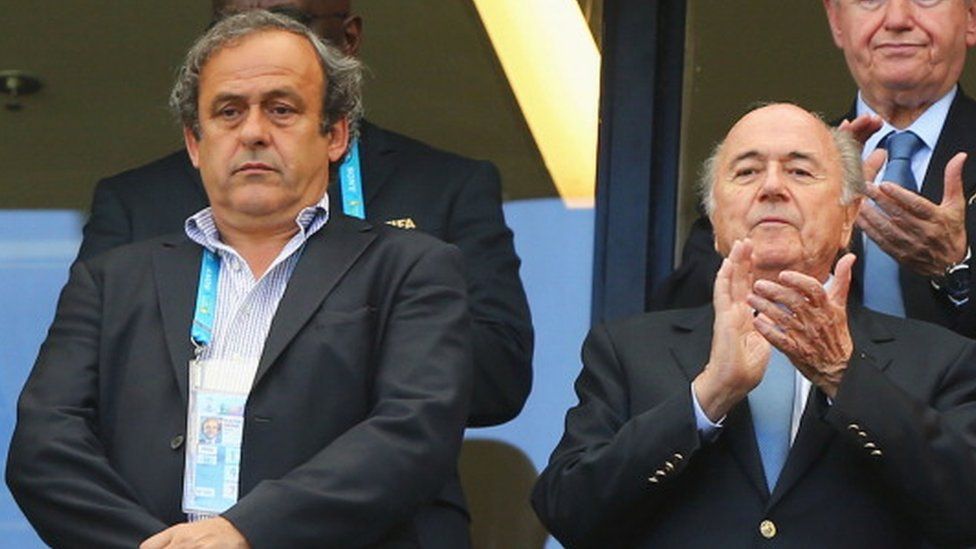 Fifa, football's world governing body, was engulfed by allegations of corruption in 2015

Former Fifa officials Sepp Blatter and Michel Platini have been charged with fraud and other offences in Switzerland.

Mr Blatter and Mr Platini now face trial at a court in Bellinzona.

If found guilty of the charges, the pair could receive prison sentences of several years or fines.

The case was opened in September 2015 after Fifa, football's world governing body, was dogged by accusations of widespread corruption.

Fifa's ethics committee launched an investigation which saw both men banned from the game and forced to leave their positions.

The affair ended Mr Blatter's 17-year spell in charge of Fifa and Mr Platini's campaign to succeed his former mentor.

A year later Mr Platini was forced to resign as president of Uefa, Europe's football governing body, after losing an appeal against his ban.

Both Mr Blatter, 85, and Mr Platini, 66, have denied any wrongdoing.

The Swiss case centres on a request for payment for advisory work Mr Platini did for the then-Fifa president Mr Blatter between 1998 and 2002.

Prosecutors said Mr Platini demanded the payment "over eight years after the termination of his advisory activity". "With Blatter's involvement, Fifa made a payment to Platini in said amount at the beginning of 2011," the prosecutors said.

They said Mr Blatter and Mr Plantini have both been accused of fraud, misappropriation, criminal mismanagement and forgery of a document.

Mr Nellen said it was "clear that the investigation should have been discontinued long ago".

In his own statement, Mr Blatter said he looked forward to the trial and hoped "this story will come to an end".

He said the payment to Mr Platini was based on a verbal agreement and had been delayed because Fifa was not able to pay the entire amount at the time.

Mr Blatter said the payment had been approved by "all responsible Fifa bodies" and that Mr Platini had paid tax on the amount "at his Swiss place of residence".

Mr Blatter and Mr Platini were two of the most powerful figures in world football. Their roles at the top of the sport's governing bodies gave them enormous influence in the game.

A successful football player for club and country, Mr Platini was widely tipped to succeed Mr Blatter following his resignation in 2015, after US prosecutors charged several top Fifa executives with corruption following a major inquiry by the FBI.

The charges came after a dramatic raid on a luxury hotel in Zurich and the arrest of seven Fifa executives.

When Mr Platini himself became embroiled in the investigation, he withdrew his candidacy for the Fifa presidency.

The FIFA ethics committee then suspended Mr Blatter and Mr Platini, before initially banning each from football for eight years. Those bans have since been reduced to six in Mr Blatter's case and four in Mr Platini's.

Last year, the European Court of Human Rights (ECHR) rejected an appeal against Mr Platini's ban, which it said "was justified".