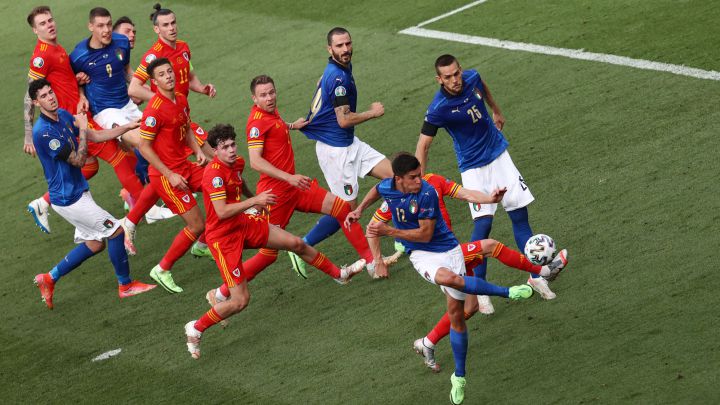 Wales demonstrated great resolve in defeat against Italy as they clung on with 10 men for a result which was enough to secure their place in the second round of Euro 2020.

Their automatic qualification was under threat with Switzerland beating Turkey 3-1 in Group A's other fixture, but Wales withstood relentless Italian pressure to scrape through in second place on goal difference.

Italy had already qualified for the last 16 and, despite making eight changes to their team, they were still utterly dominant, Matteo Pessina's goal giving them a 1-0 half-time lead which scarcely reflected their superiority.

Wales were forced to play the final half an hour a man down after Ethan Ampadu was sent off for a lunge on Federico Bernardeschi, intensifying the Italian onslaught.

And although Italy's win was never in doubt - this was their 30th consecutive match without defeat, equalling their national record - Wales dug deep to ensure the margin of victory was not too damaging.

Finishing third may well have been enough for Wales to progress as one of the tournament's four best third-placed teams, but this result ensured they kept their destiny in their own hands.

Robert Page and his players can now look forward to a second-round match against Group B's runners-up in Amsterdam next Saturday.

As for Italy, an 11th consecutive win will see them face Group C's second-placed team at Wembley on the same day.