Beginning this weekend, boxing fans will be made to pay to watch the popular De-Luxy Boxing League following a decision by the organisers, Ghana Boxing Authority (GBA) and Imax Media Group, to recalibrate the ticketing system and offer tickets for sale to patrons.

On Saturday, patrons will have to purchase tickets to get access to the Bukom Boxing Arena to watch the Fight Night 17 clashes live.

According to a GBA statement, three categories of tickets will be introduced from Saturday, with patrons being required to pay GH¢50 for Ringside seats, GH¢30 (Downstairs) and GH¢10 (Upstairs).

Security checks
Henceforth, fans who visit the boxing arena will go through security checks at the main entrance and must be aware of the installation of CCTV cameras to check individuals or groups from fomenting trouble.

In its determination to enforce discipline at the fight venue, the GBA has slapped a one-year ban on boxing trainer, Sulemana Martey, of Sonia Boxing Gym for misconducting himself at the Bukom Boxing Arena during Fight Night 16 on October 29. Additionally, Martey has been fined GH¢5,000 to be paid immediately or face further sanctions.

The ban, which took effect from November 2, followed an investigation conducted by the GBA’s Arbitration Committee which found the trainer guilty of instigating his supporters to cause mayhem, attack ring officials and destroy properties at the arena after the bout involving Godwin Tetteh and John Zile.

It is followed in second position by Somia Gym with 33 points from 11 victories and five losses, while Attoh Qarshie Gym is in third position with 32 points.

At the bottom position of the 12-team league table is Wisdom Gym with three points from one win and 15 losses. 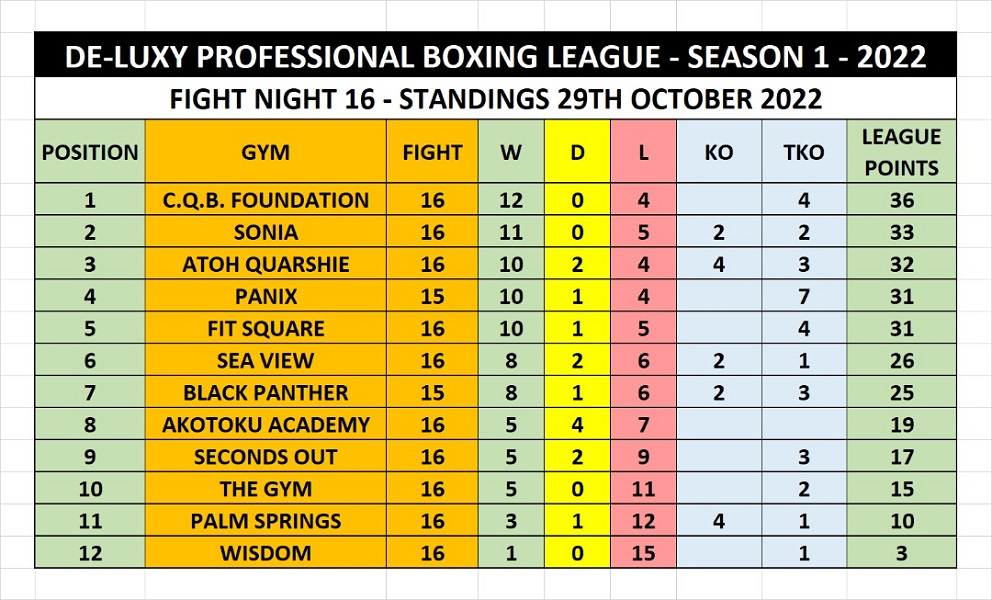