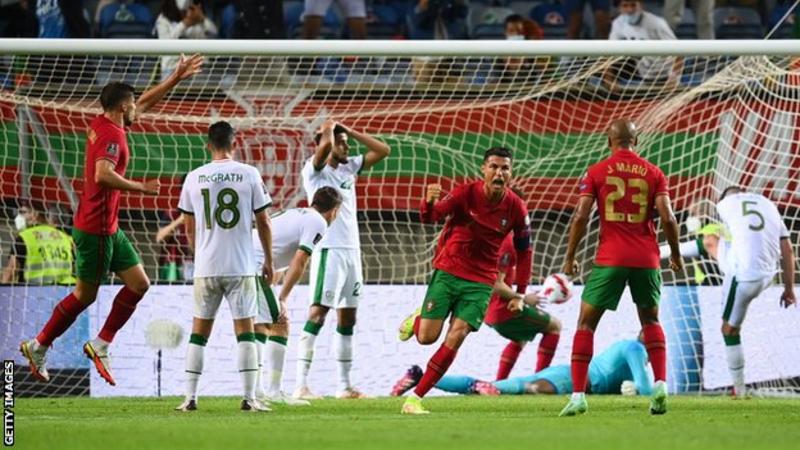 Cristiano Ronaldo has scored 28 headers for Portugal, including his two against the Irish Follow @Graphicgh

Cristiano Ronaldo broke the world record for goals scored in men's international football as he hit his 110th and 111th goals for Portugal in their dramatic 2-1 World Cup qualifying win over the Republic of Ireland.

The 36-year-old scored two late headers - to break and extend the record - after he had a penalty saved by Gavin Bazunu.

Ali Daei, who scored 109 goals for Iran between 1993 and 2006, held the record which Ronaldo equalled with a double against France at Euro 2020.

Ronaldo, who rejoined United from Juventus on deadline day, and Daei are the only two male players to score 90 or more international goals.

"I'm so happy, not only because I beat the record, but for the special moment that we had," he told RTE. "Two goals at the end of the game. I have to appreciate what the team did, we believed until the end. I'm so glad."

This is the latest landmark to push the argument for the Portuguese to be considered an all-time great.

He is already the top scorer in club football's top tournament, the European Cup/Champions League, a trophy he has won five times.

The former Real Madrid forward is also the top scorer in European Championship history (14) and in Euros and World Cups combined (21).

How his international goals have come

What tournaments have they come in?

Almost half of Ronaldo's goals have come in the final 30 minutes of games.

He has netted 33 times in the final 15 minutes - including twice against the Irish - and 22 times between the 61st and 75th minute.

Some 91 of his goals have been inside the box with 20 from outside. He has scored 14 penalties and nine free-kicks.

Lithuania and Sweden - seven each - are the sides he has scored the most against. He had not scored against the Republic of Ireland before Wednesday's game in the Algarve.

How Ronaldo's record stacks up
There is no official database for top men's international goalscorers which makes it hard to say exactly who ranks where.

Iran's Daei, who played for Bayern Munich, was said to have broken Hungarian legend Ferenc Puskas' record in 2003 with his 85th international goal. That is the year Ronaldo made his international debut.

Cynics could argue that Daei's goals were against easier opposition - with 95 against fellow Asian sides.

He scored eight against the Maldives and Laos and six against Lebanon.

But Ronaldo has also benefitted from facing weaker nations including six against Andorra and Luxembourg each.

The only question is who ranks below them? Mokhtar Dahari of Malaysia - who played in the 1970s and 80s - is credited as being third in some places with 89 goals. A Fifa tweet this summer seemed to confirm that, despite it never being officially validated.

Puskas is definitely next, with 84 goals in 85 caps for Hungary. He was the top-scoring European before Ronaldo.

Zambia's Godfrey Chitalu scored 79 goals between the 1960s and 1980s - again not certified but also mentioned on that Fifa tweet.

Ronaldo is unlikely to beat the world record, including women's football, of Canada striker Christine Sinclair. She has scored 187 goals in 304 caps and has not yet retired.

Ronaldo gets one over on Messi
In the strange modern-day phenomena of Ronaldo and Lionel Messi fanboys, this is another tick in the Ronaldo column.

Messi - the joint eighth top scorer in the world - is 34 and on current form would need to play into his forties to reach 111 international goals.

His finest hour at a World Cup was a hat-trick against Spain in the group stages three years ago in Russia, including a late free-kick. That is one of his nine international hat-tricks - including one against Switzerland in the 2019 Uefa Nations League semi-finals.

He has also scored in all nine major tournaments he has played in - World Cups and European Championships. Including the Confederations Cup and Nations League, he has scored in 11 out of 11.

He won the Golden Boot at Euro 2020 with five goals in four games, beating five-goal Czech Patrik Schick on assists.