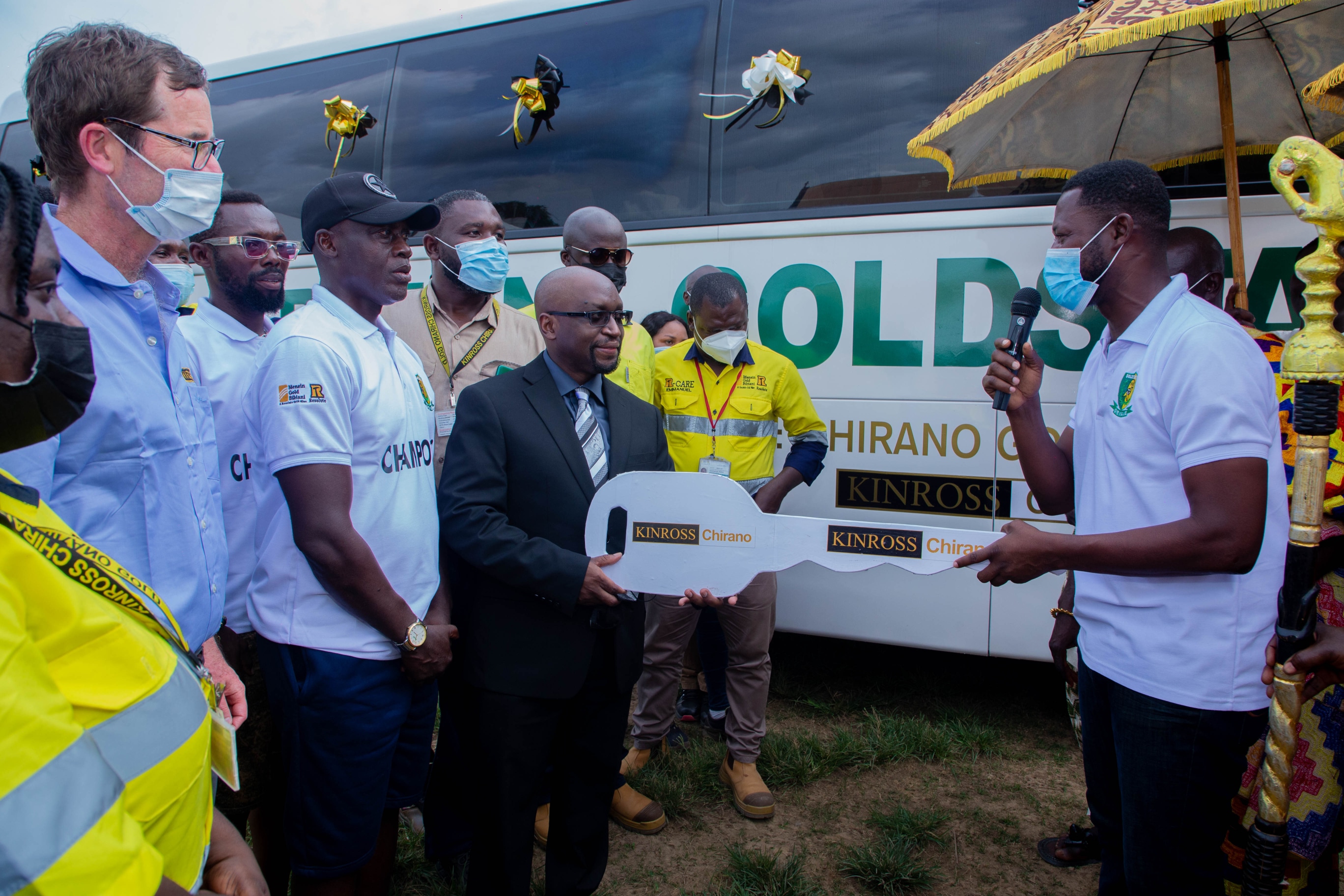 Chirano Gold Mines, as part of efforts to support communities and institutions within its catchment areas has donated a 33-seater bus to the Bibiani Goldstars FC.

This is to facilitate the team's participation in the Ghana Premier League.

Gold Stars will for the first time in their 24-year history participate in the elite division of Ghana Football, after coming close several times.

The Bibiani-based club secured a historic Ghana Premier League promotion from Zone Two of the Division One league under former Coach Kobina Amissah.

The ceremony to present the bus was graced by chiefs of the Western North Region, government officials as well as management and staff of Mensim Bibiani Goldfields and Chirano Mines.

Making the presentation, the Vice President and General Manager of Chirano Gold Mines, Mr Terence Watungwa, said the donation reinforces its commitment to being an outstanding corporate citizen and a strategic partner in the socio-economic development of the Western North Region of Ghana.

“I want to congratulate the Bibiani Gold Stars for qualifying for the Premier League. You have all worked cohesively towards your goal, from the lower rungs to the first division and now, you have qualified for the Premiership.

“Many clubs never reach the pinnacle of association football, but you have succeeded.  The Bibiani Gold Stars have indeed glorified their motto, “Gye Nyame”,” he stated.

Staying in the league

He said the company was optimistic that Goldstars FC has the skill needed to stay in the premier league.

He noted that to successfully compete at this high level, the football club required support and assistance in many ways.

“It is for this reason that we are very glad to support the club with this bus donation,” he said.

The General Manager also said the company recognised the fact that a successful campaign in the Premiership would bring development and recognition to the Western North Region.

“I believe this is the only region out of the new six where a club has successfully stepped up into Ghana’s Premier League and we are very excited to follow your success in this journey.

“The Western North region will count on you to bring glory and honour by winning your games.  Let the other football clubs, Kumasi Asante Kotoko, Accra Hearts of Oak, and others, know that we have arrived, and we are going to compete for the pride and prize of the league trophy,” he stated.

He said a successful football team would promote local development, attract businesses to the region, and bring the communities together.

“We will be very proud to see the players of the Bibiani Gold Stars FC disembark from this well-equipped bus onto the football pitch during match days to the cheers and admiration of supporters,” he said.

The Chief Executive Officer of Bibiani Gold Stars, Mr Kwesi Aidoo, for his part, called for unity among the supporters of the Club.

He also commended Chirano for its support towards the growth and development of the Club.

“We are so happy to see something beautiful in front of us, nothing but a 33-seater VIP Granbird bus. We are hoping this is a sign of unity that football can bring to society.

“And to see people from all parts of the Western North Region coming together to unveil such a facility, this calls for unity. And with unity of purpose we can carry the name of Bibiani Gold Stars to higher heights,” he stated.