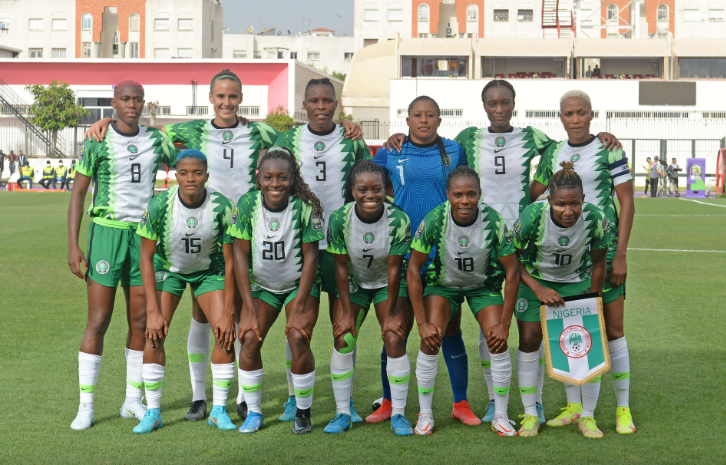 Defending champions Nigeria kept their title defense on course with a gusty 1-0 win against rivals, Cameroun in their quarter-finals clash at the ongoing Women's Africa Cup of Nations (WAFCON) in Casablanca on Thursday.

Rashedat Ajibade's 56th ghost header put the Super Falcons in the driving seat to further enforce their dominance not only over the Indomitable Lionesses but the WAFCON in general.

Importantly, it ended up being the goal that would put the Nigerians on their way to their eighth Women's World Cup (WWC), having made an appearance since their debut in 1991.

Given the stakes - a semi-finals progress and a ticket to next year's Women's World Cup (WWC) - there was everything to fight for and the game in Casablanca attracted significant delegations from their respective football federations, with Nigeria supported by their FA President, Amaju Pinnick, and Samuel Eto'o leading the Cameroun delegation.

Though both sides have seen some changes in their last four decisive consecutive WAFCON encounters from 2014 (final), 2016 (final) as well as the semi-finals in 2018, very little had changed regarding the intensity of rivalry between the two sides.

An uncompromising first half ended without a goal, but the contest would pick up momentum in the second half, with both sides stepping up their game. In the 56th minute, the Nigerians profited from their efforts, with Ajibade nodding home a good cross from Ifeoma Onumonu.

The Lionesses pushed and pressed for the equaliser and possibly send the game into extra time, but the resolute Nigerian defence denied them any chance.

Indeed in the dying minutes of the game, they pressurised the Nigerian goal area but the defenders, as often as they had to, cleared the danger, ballooning the ball as far as they could just to protect their goal until the final whistle.

And when the whistle went, the final result was no surprise, after all, the Camerounians have never succeeded in beating the Nigerians so far as the WAFCON is concerned.

So while this botched attempt means the end of the road for the Camerounians who may be wondering how long they must wait to ever beat Nigeria, for the defending Champions, it is not just an onward march to their 11th semi-finals but the result edges them closer to a 10th title and seals their place among the eventual 24 teams for the 2023 WWC in Australia and New Zealand.

With this contest over, the WAFCON semi-finals and 2023 WWC lists are near complete, Nigeria joining Zambia and Morocco who advanced on Wednesday.

The final slot will be decided between South Africa and Tunisia.