Boxing in the genes: The story of Joseph Commey 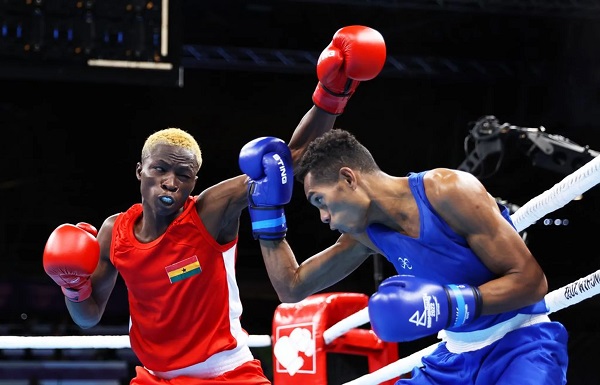 To Joseph Commey, winning a gold medal at the Commonwealth Games in Birmingham will give his family name a befitting tribute.

The 18-year-old had known no other sport than the fistic sport which made his grandfather, the late Oblitei Commey and his uncle Percy Commey a household name in Ghana.

One of his uncles, Rocky Commey was a proising boxeer whose career ended tragically after he was knocked down by a vehicle while undergoing routine morning jogging near Korle Lagoon.

Commey may not have been born when his relatives reigned in Ghana boxing then but the family legacy remains in his genes.

"I heard a lot about the exploits of my grandfather and father during their boxing days and it was great to hear people speak highly of them," Commey told the Daily Graphic.

"It was not something I dreamt of doing as a kid but I embraced the sport when the opportunity availed itself."

Commey's late elder brother, John Commey, was a core member of the Black Bombers until his demise two years ago.

His tragic death was the extra motivation needed by his younger brother, Joseph, to follow in his footsteps.

Joseph was first introduced to boxing by his late brother, John, during a community bout at Jamestown --- a boxing community in Accra.

He called the bluff of boxer Michael Decardi Nelson whose opponent failed to show up on the night and managed a draw with him.

"My late brother was my inspiration when I was growing up and his demise really affected me but I had to move on.

"He was by my side when I first wore gloves to challenge an opponent in the ring and he motivated me to go for the win.

"He had so many plans and targets of winning gold at international competitions but he didn't get the chance to represent Ghana until his demise.

"I feel I have to step in his shoes and produce that because it is best tribute I can give to my late brother."

He was naturally attracted to boxing within his locality despite coming from a boxing family.

"Everyone wants to challenge someone to a fight in Bukom and that is one major reason why everyone within our community wants to fight.

"The passion for boxing is natural because we always want to challenge ourselves for the bragging rights."

Later today, the young featherweight boxer would take on Papua New Guinea's Allan Oike in a Round of 16 featherweight tie.
The Ghanaian remains hopeful that he would come out victorious against his opponent.

"Nothing is going to stop me from winning that bout because I know why I came here and I am not going to lose.

"I need the support of everyone to achieve my target and I am confident of returning home with a medal."

With the Commonwealth Games ongoing, Joseph dreams of representing Ghana once more at the 2024 Olympic Games in Paris before planning a professional career.

"I am very young and talented so I want to get the experience at these major international competitions before thinking of a pro career.

"The Olympic Games should be my next target before I shift my focus to turn professional at the end of the day."