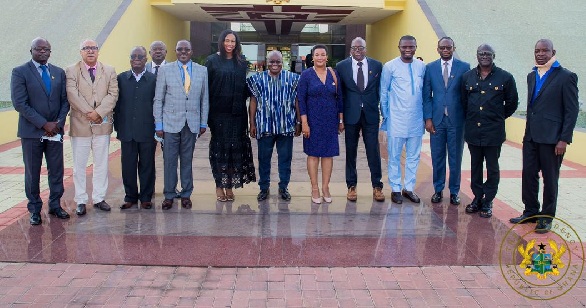 The Africa Union Sports Council (AUSC) Technical Committee has expressed satisfaction with Ghana's commitment to hosting a successful 2023 African Games as well as the level of preparation so far.

An eight-member team, led by Mr Stanley Mutoya, has concluded a four-day inspection tour of Ghana to inspect some of the facilities in Accra and Kumasi earmarked to host the continent's premier sporting event.

During the visit last week, the team paid a courtesy call on President Nana Addo Dankwa Akufo-Addo at the Jubilee House in Accra at which the President assured them of Ghana's determination to host a successful competition.

Later at a joint press briefing at the Alisa Hotel by the Minister of Youth and Sports, Mr Mustapha Ussif, and the Local Organising Committee (LOC), Mr Mutoya expressed the technical committee's satisfaction with the country's preparation so far and praised the efforts being put in by the government and the LOC towards the African Games in two years' time.

He said the team were happy with what they had seen, particularly the government's goodwill, and availability of facilities like the Games Village.

"We are happy with the roadmap given by the LOC, but we have a flexible African Games master plan because there are emerging issues like COVID-19 which we have factored into the plan," he said.

As part of the visit, the team also organised a workshop for the LOC to deliberate on issues bordering on the successful hosting of the African Games, among others.

Despite growing concern by the public about the delayed start in the construction of the Olympic Stadium for the competition, both Mr Ussif and LOC chairman, Dr Kwaku Ofosu-Asare, gave assurances that the project would be completed on schedule as some preliminary work was already underway at the site at Borteyman ahead of the official sod-cutting for full-blown construction to take place.

For Mr Mutoya, there was no cause for alarm as the LOC was working within the timelines set, with Ghana expected to hand over completed facilities by February 2023.

The team will visit Ghana again in September for another inspection tour on the progress of work.