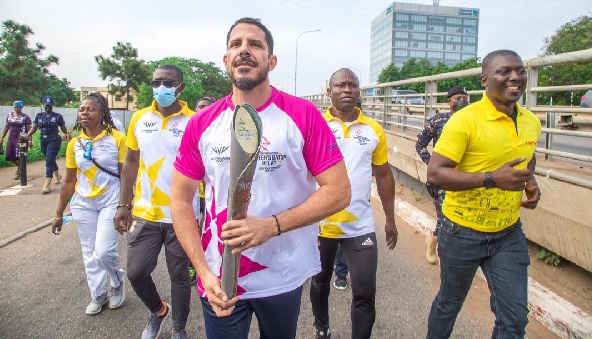 Industrial giants, Ashfoam Ghana Limited, has pledged its commitment to the development of sports through its strategic partnership with the Ghana Olympic Committee (GOC) to ensure Team Ghana’s success at next year’s Commonwealth Games and the 2023 African Games.

Ashfoam, which signed a four-year deal with the GOC as a major sponsor to support both local and international activities of the Olympic Movement, said it would continue to lend its support to help Ghana excel in the two major competitions.

In connection with that Ashfoam paid for the kit won by Ghanaian athletes at this year’s Olympic Games in Tokyo, where Samuel Takyi won the nation’s first medal in 29 years.
The General Manager of Ashfoam, Mr George Massih, reiterated the company’s determination to keep investing in sports to ensure that Ghana builds on the success of the Tokyo Olympics.

In recognition of Ashfoam’s important role in the GOC’s activities ahead of the Commonwealth Games, Mr Massih was among an exclusive group of individuals who participated in the recent Queen’s Baton Relay in Accra.

Mr Massih, who handed over the Queen’s Baton to the Canadian High Commissioner to Ghana, noted that it was both an honour for his company and an indication of Ashfoam’s readiness to support Ghana’s campaign in Birmingham.

“It’s a great honour for the Ghana Olympic Committee, the organisers of the Birmingham Commonwealth Games and the Ministry of Youth and Sports to select our brand to run in the Queen’s Baton, a feat reserved for a few individuals and organisations across the world.
“To us, it confirms that GOC recognises the immense contribution that Ashfoam has made to promote sports, especially athletics, in Ghana,” Mr Massih said.

He challenged the youth to take advantage of the times to develop their talents and careers in sports, and pledged his desire to see more youth participate and win medals for Ghana at next year’s Commonwealth Games.

Beyond its partnership with the GOC, Ashfoam has supported other sporting disciplines and teams over the years, including supporting the national beach volleyball team to participate in the Buenos Aires beach volleyball tournament in 2019.

The company has also supported capacity building initiatives in sports such as a seminar on ‘Building sports brands through social Media’ at the Accra Stadium.