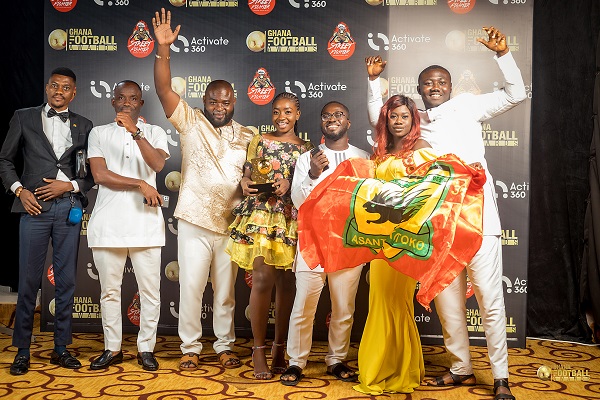 Kotoko were crowned Male Team of the Year, Special Fans of the Year (Porcupine Tertiary), Men’s Coach of the Year (Prosper Ogum Narteh), Best CEO of the Year (Nana Yaw Amponsah) and the Most Vibrant Club on Social Media awards at the fourth edition of the event.

Receiving the Best CEO of the Year award, Nana Yaw Amponsah, who received the award for the second consecutive time, advised clubs in the country to concentrate on developing the youth for the future.

He added that focusing on youth development would help produce great talents for the national teams in the future.
“This is the second time I’m winning this award in two years. I want to call on clubs in the country to concentrate on developing the youth for the future.

“It is the only way to produce great talents for the various national teams in the future,” said Nana Yaw Amponsah.

Grace Asantewaa of Real Betis FC won the Women’s Footballer of the Year award and Bechem United’s Iddrisu Abdulai became the Goalkeeper of the Year.

In the other awards, Ashantigold striker Yaw Annor received the Home-based Footballer of the Year and Topscorer of the Ghana Premier League awards.