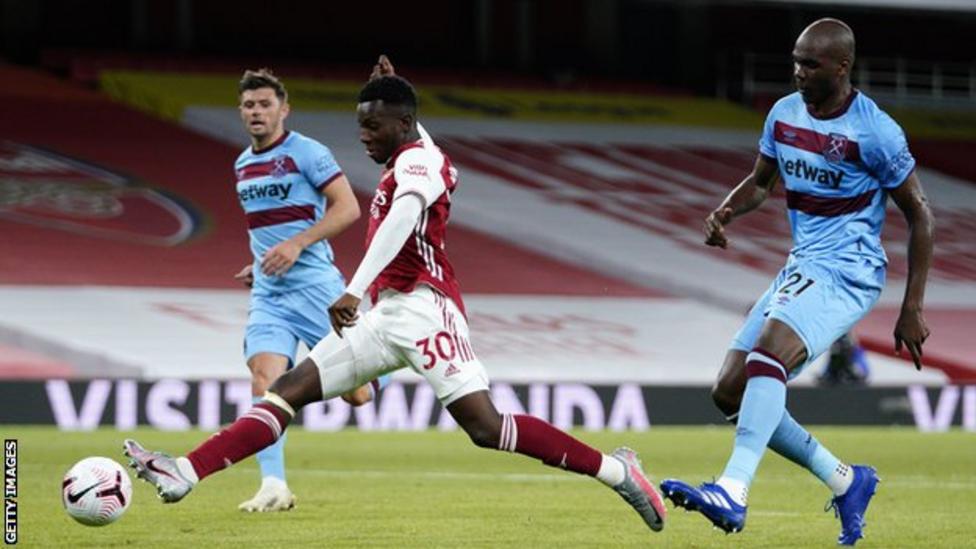 Arsenal's last shot prior to Nketiah's goal had come in the 47th minute
30.5k Shares

The result condemned the Hammers to a second successive defeat - the third time in the past four seasons they have lost their first two matches.

"What I like is the approach the boys had in the last 25 minutes where I could see they were a bit down and then they lift it," Arteta said.

"Probably a few months ago we would have drawn or lost that game and today we win it. In the end you have to find a way because there will be games like this through the season."

The Gunners largely controlled the opening stages of the contest and deservedly went ahead when Alexandre Lacazette headed in from Pierre-Emerick Aubameyang's chipped cross.

However, the Hammers, who always looked dangerous on the counter-attack, levelled just before the interval when Michail Antonio bundled in Ryan Fredericks' cross at the end of a sweeping move.

While Arsenal continued to enjoy more of the ball after the break, David Moyes' side created the better openings in front of goal with Antonio heading against the bar and seeing a scuffed close-range effort saved by Bernd Leno.

But, Nketiah's late tap-in from a Dani Ceballos pass ensured Arsenal continued their fine home record against the Hammers, having won 11 of the last 12 meetings at Emirates Stadium.

Last month, Ghana coack CK Akonnor revealed that the country had made contact with the family of Arsenal forward Eddie Nketiah over a possible switch of international allegiance for the 21-year-old.

Born to Ghanaian parents in London, the striker currently represents his country of birth at U-21 level.

"We've been able to talk to Eddie Nketiah's parents. But even though we've tried, it doesn't mean it's a done deal," Ghana coach CK Akonnor has told Starr FM.

"Myself and the Ghana Football Association are working hard at it."

Talks about a potential international senior future with Ghana heightened when the nation's Football Association (GFA) sent out a congratulatory message to the striker on social media following Arsenal's 2-1 FA Cup final triumph over Chelsea.

The attacker, who spent the first half of last season on loan at Leeds United, posted a team celebration picture with the caption "Champions Arsenal", a tweet the GFA quoted with a reply "Congratulations Eddie Nketiah".

The striker then responded "Thank you" in an exchange that would fuel nationality switching speculation.