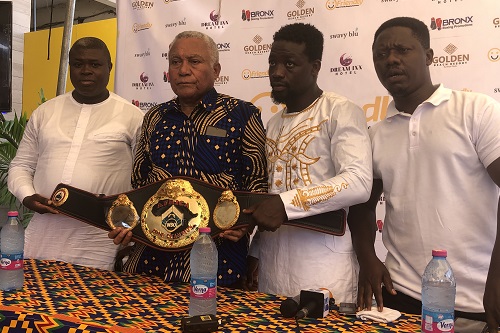 Quaye is seeking to make it two consecutive wins since losing to Michael Ansah in their widely publicised bout early this year.
The 26-year-old boxer wants to use his next fight to relaunch his inconsistent career that has seen him win 20 fights with three defeats in his professional career.

“It is a must-win for me and I am glad to be fighting in front of my home crowd,” Quaye told the Daily Graphic during the launch of the bout in Accra.

“I need this title to kickstart my career. I have gone through a lot of ups and downs throughout my career and I believe this is the time for me to get this chance,” he added.

Mr Samir Captan, WBO Africa Supervisor, called on Quaye to seize the opportunity to win the belt to place him in the top 15 of the lightweight division.

“This is a perfect opportunity for you to get closer towards your dream of becoming a world champion and I want you to take it up,” Mr Captan said.

For his part, the trainer of Quaye, Lawrence Carl Lokko, was optimistic that his fighter would come out victorious on December 10.
Quaye stopped Benjamin Ankrah on his return to the ring in July, and December 10 could offer him an opportunity to make a statement for himself.

Amos will be making his second ring outing this year after his knockout win over Baraka Joseph in May.
The Tanzanian lost his attempt to win the WBO Global super featherweight crown against Jeremia Nakathila last December.